EUGENE, Ore. -- May 17, 2016 -- A study of the 15-mile length of Coos Bay, from the ocean to the city of the same name, finds the bay is free of toxic levels of reduced oxygen that often affect other Oregon locations.

The narrow offshore continental shelf combines with the deep-dredged ship channel to help maintain safe oxygen levels during summertime wind changes and reduced rainfall that curtails freshwater discharge from the Coos River, says Dave Sutherland, a professor in the Department of Geological Sciences.

The research is good news for today's fishing industry in the region, said Sutherland, the study's lead author. More importantly, he added, the study provides a foundation for monitoring and projecting how changing climate conditions may raise the chances of oxygen depletion, or hypoxia, in the future.

"This region of the coast is understudied," said Sutherland, who leads the UO's coastal oceanography research group. "This research was really about getting a wealth of baseline information so that we can figure out what is happening now and use it to help us prepare for what may happen in the future. The system is working now but could change based on weather conditions. "

The study -- published in the journal Estuarine, Coastal and Shelf Science -- was based on almost two years of monthly water samples gathered in the estuary and reviews of 50 years of similar records (1957-2007) kept by the Oregon Department of Environmental Quality. Data gathered included acidity, salinity, temperature and levels of dissolved oxygen.

The UO study also incorporated measurements taken since 2002 by the South Slough National Estuarine Research Reserve and since 2011 by the Confederated Tribes of the Coos, Lower Umpqua and Suislaw Indians.

Lowest readings of dissolved oxygen were found in late summers, as is the case in other estuaries along the Oregon coast, when incoming salty seawater settles longer in the estuary and warmer, drier conditions reduce the amount of fresh water from the Coos River.

"As phytoplankton die, they sink to the bottom where all the oxygen gets depleted and you get low-bottom hypoxia," he said. That leads to stress on cool-water fish such as salmon. Bottom dwellers -- crabs, oysters, worms, clams, sponges and rockfish -- face potentially lethal effects.

Early in the summer, upwelling occurs: Prevailing winds blow the ocean's surface water away from shore and cold, nutrient-rich but low-oxygen deep water rises, making for the chilly summertime wind.

In Oregon coastal estuaries to the north of Coos Bay, the offshore shelf is much wider. Combined with the wind, seawater remains longer in the shallower estuaries as the summers get dry, making for stagnant conditions, less flushing and more lethal hypoxic conditions.

"Despite recent alarm about inner-shelf hypoxia on the Oregon coast, there appears to be no hypoxia currently in the main channel of Coos Bay, and there is little evidence of past hypoxia in the estuary," Sutherland and co-author Molly A. O'Neill wrote in their conclusion.

That could change, however, if climate change makes the region hotter and drier and chokes off the flushing action of fresh water from the river, Sutherland said.

The study began as a graduate thesis for O'Neill, who earned her master's degree in 2014. Together, she and Sutherland collected their monthly samples from Coos Bay from a small research vessel made available for the UO's Oregon Institute of Marine Biology, located in Charleston just inside the ocean end of the bay.

Sutherland expanded that effort and continues to study the region. The research, which will be featured in a five-panel display dedicated to UO research in the new Charleston Marine Life Center, provides basic data that could help feed mitigation efforts to battle hypoxia in the region and elsewhere.

Oregon Sea Grant, via the National Oceanic and Atmospheric Administration's National Sea Grant Program, supported the study by way of a grant routed to Sutherland through his membership in the UO's Environmental Science Institute. The Oregon Legislature and National Science Foundation also provided funding. 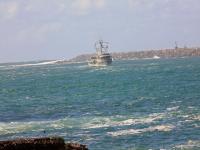