Those solar panels on top of your roof aren't just providing clean power; they are cooling your house, or your workplace, too, according to a team of researchers led by Jan Kleissl, a professor of environmental engineering at the UC San Diego Jacobs School of Engineering.

In a study in an upcoming issue of the journal Solar Energy, Kleissl and his team published what they believe are the first peer-reviewed measurements of the cooling benefits provided by solar photovoltaic panels. Using thermal imaging, researchers determined that during the day, a building's ceiling was 5 degrees Fahrenheit cooler under solar panels than under an exposed roof. At night, the panels help hold heat in, reducing heating costs in the winter.

As solar panels sprout on an increasing number of residential and commercial roofs, it becomes more important to consider their impact on buildings' total energy costs, Kleissl said. His team determined that the amount saved on cooling the building amounted to getting a 5 percent discount on the solar panels' price, over the panels' lifetime. Or to put it another way, savings in cooling costs amounted to selling 5 percent more solar energy to the grid than the panels are actually producing— for the building researchers studied.

Data for the study was gathered over three days in April on the roof of the Powell Structural Systems Laboratory at the Jacobs School of Engineering with a thermal infrared camera. The building is equipped with tilted solar panels and solar panels that are flush with the roof. Some portions of the roof are not covered by panels.

The panels essentially act as roof shades, said Anthony Dominguez, the graduate student lead on the project. Rather than the sun beating down onto the roof, which causes heat to be pushed through the roof and inside the ceiling of the building, photovoltaic panels take the solar beating. Then much of the heat is removed by wind blowing between the panels and the roof. The benefits are greater if there is an open gap where air can circulate between the building and the solar panel, so tilted panels provide more cooling. Also, the more efficient the solar panels, the bigger the cooling effect, said Kleissl. For the building researchers analyzed, the panels reduced the amount of heat reaching the roof by about 38 percent.

Although the measurements took place over a limited period of time, Kleissl said he is confident his team developed a model that allows them to extrapolate their findings to predict cooling effects throughout the year.

For example, in winter, the panels would keep the sun from heating up the building. But at night, they would also keep in whatever heat accumulated inside. For an area like San Diego, the two effects essentially cancel each other out, Kleissl said.

The idea for the study came about when Kleissl, Dominguez and a group of undergraduate students were preparing for an upcoming conference. They decided the undergraduates should take pictures of Powell's roof with a thermal infrared camera. The data confirmed the team's suspicion that the solar panels were indeed cooling the roof, and the building's ceiling as well.

"There are more efficient ways to passively cool buildings, such as reflective roof membranes," said Kleissl. "But, if you are considering installing solar photovoltaic, depending on your roof thermal properties, you can expect a large reduction in the amount of energy you use to cool your residence or business."

If additional funding became available, Kleissl said his team could develop a calculator that people could use to predict the cooling effect on their own roof and in their own climate-specific area. To further increase the accuracy of their models, researchers also could compare two climate-controlled, identical buildings in the same neighborhood, one with solar panels, the other without.

The study was funded by a NASA Graduate Student Research Program fellowship. Kleissl's research is funded by the National Science Foundation, California Public Utilities Commission, the Department of Energy and the California Energy Commission. The authors thank the staff of the Powell Structural Lab, especially Andrew Gunthardt, for making the building available for the study. 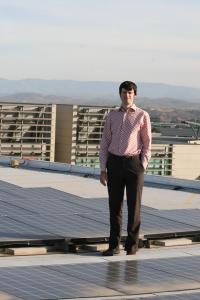