Despite its name, the Dead Sea does support life, and not just in the sense of helping visitors float in its waters. Algae, bacteria, and fungi make up the limited number of species that can tolerate the extremely salty environment at the lowest point on Earth.

Some organisms thrive in salty environments by lying dormant when salt concentrations are very high. Other organisms need salt to grow. To learn which survival strategy the filamentous fungus Eurotium rubrum uses, a team of researchers led by Eviatar Nevo from the University of Haifa in Israel, Igor Grigoriev of the U.S. Department of Energy Joint Genome Institute (DOE JGI), and Gerhard Rambold, University of Bayreuth, Germany and their colleagues studied its genome. They described their findings in the May 9, 2014 issue of Nature Communications.

"Understanding the long-term adaptation of cells and organisms to high salinity is of great importance in a world with increasing desertification and salinity," the team wrote. "The observed functional and structural adaptations provide new insight into the mechanisms that help organisms to survive under such extreme environmental conditions, but also point to new targets like the biotechnological improvement of salt tolerance in crops." In principle this discovery could revolutionize saline agriculture worldwide by laying the groundwork of understanding necessary to appropriately using salt resistance genes and gene networks in crops to enable them to grow in desert and saline environments.

The DOE JGI team first sequenced, assembled and annotated the 26.2-million base genome of E. rubrum. The team found that the genome contained just over 10,000 predicted genes. They also found that the E. rubrum proteins had higher aspartic and glutamic acid amino acid levels than expected. When the team compared E. rubrum's gene families against those in two other halophilic species (Wallemia ichthyophaga and Hortaea werneckii), they found that high acidic residues were common in all three species, a general trait all salt-tolerant microbes share.

To learn more about the fungus' tolerance for salt, Tami Kis Papo at the University of Haifa grew samples in liquid and solid media at salinities from zero up to 90 percent of Dead Sea water. The researchers found that it had viable spores when grown in 70 percent diluted Dead Sea water, conditions equivalent to an algal bloom in the Dead Sea 20 years ago. A study conducted by Alfons R. Weig at the University of Bayreuth of E. rubrum's transcriptome, that small fraction of the genome that encodes the RNA molecules in order to carry out instructions to build and maintain cells, showed that in high salinity conditions, the fungal cells need to keep cell membrane transport under tight control. "This clearly indicates that the fungus tries to cope 'actively' with its extreme environment and does not simply fall into dormancy," the team noted, "as might be expected by the greatly reduced growth rates."

In addition to contributing to a better understanding of salt tolerance mechanisms for agriculture, this work may also have applicability to the DOE's interests in developing new strategies to improve biofuels production. For instance, the DOE JGI and its partners are sourcing microbial and fungal enzymes for more effective biomass pretreatment with ionic liquids, environmentally benign organic salts often used as green chemistry substitutes for volatile organic solvents. 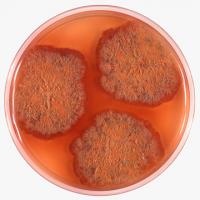