Fish has been a predominant and high-quality protein and oil source in the human diet since ancient times. A new study by researchers from the Smithsonian Tropical Research Institute (STRI), the Zinman Institute of Archaeology and the Oranim Academic College examined traditional fish preparation employed by fisherfolk in Panama and Egypt, revealing patterns of modifications to the fishes' skeletons, which are comparable to those found among fish remains recovered in archaeological sites.

Despite its relevance as a nutritious food for coastal populations and its importance for trade with inland communities, archaeologists have little insight into the methods used for the long-term processing and preservation of fish in the past. This drew Richard Cooke, STRI staff archaeologist, and Irit Zohar, curator of biological collections at Oranim Academic College and researcher at the Zinman Institute of Archaeology at the University of Haifa, to document the traditional methods currently practiced by fisherfolk in the coastal populations around Parita Bay in central Pacific Panama and at Nabek Oasis in southern Sinai-Egypt. Through participant observations, imaging of the preparation methods employed and measurements of the fish species processed, they reached several conclusions.

"We discovered that in most cases, archaeologists and historians would find it very difficult to identify a fish-processing site, since most of the discarded remains are either thrown to the water or consumed by local animals," Cooke said.

They also found that three main preparation techniques prevail in today's fishing communities, regardless of their geographic location, and that fish-body size influences which method is applied. In addition, these traditional techniques leave behind particular bone fragmentation patterns that mirror those found among fish remains in archaeological sites, suggesting that ancient humans were using the same three methods that are still in use today.

"This study provides a powerful model for identifying fish butchering and preservation methods at archaeological sites around the world, and at many time periods," Zohar said. "It also vouches for the universality of human behavior for the long-term preservation of fishes of different kinds and sizes, ensuring a range of nutritious and healthful dietary resources for communities located far from the bounties of the oceans."

Lastly, their results reveal the antiquity of traditional butchering methods practiced in coastal sites, which resemble those observed in Egyptian reliefs from over 4,000 years ago.

Members of the research team are affiliated with the Smithsonian Tropical Research Institute, the Beit Margolin Biological Collections at Oranim Academic College and the Zinman Institute of Archaeology at the University of Haifa. Research was funded by the Smithsonian Institution, Weitzman Institute of Science: the Aharon Katzir Centre and the National Center for Collaboration between Natural Sciences and Archaeology, the Irene Levi Sala CARE Archaeological Foundation, the Morris M. Polver Scholarship Funds of Israel, Maria Rossi Ascoli Fellowship, Ya'aqov Rekanati Fellowship and the University of Haifa. 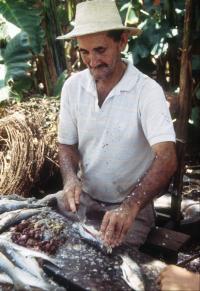