The climate 150 million years ago of a large swath of the western United States was more complex than previously known, according to new research from Southern Methodist University, Dallas.

It's been thought that the climate during the Jurassic was fairly dry in New Mexico, then gradually transitioned to a wetter climate northward to Montana.

But based on new evidence, the theory of a gradual transition from a dry climate to a wetter one during the Jurassic doesn't tell the whole story, says SMU paleontologist Timothy S. Myers, lead author on the study.

Geochemical analysis of ancient soils, called paleosols, revealed an unexpected and mysterious abrupt transition from dry to wet even though some of the samples came from two nearby locales, Myers said.

Myers discovered the abrupt transition through geochemical analysis of more than 40 ancient soil samples. He collected the samples from the Morrison Formation, a vast rock unit that has been a major source of significant dinosaur discoveries for more than 100 years.

The Morrison extends from New Mexico to Montana, sprawling across 13 states and Canada, formed from sediments deposited during the Jurassic.

Myers' study is the first in the Morrison to significantly draw on quantitative data -- the geochemistry of the rocks.

"I don't have a good explanation," he said. "Normally when you see these dramatic differences in climate in areas that are close to one another it's the result of a stark variation in topography. But in this case, there weren't any big topographic features like a mountain range that divided these two localities in the Jurassic."

Surprisingly, paleosols from the sample areas did not reveal marked differences until they were analyzed using geochemical weathering indices.

"It's sobering to think that by just looking at the paleosols superficially at these localities, they don't appear incredibly different. We see the same types of ancient soils in both places," Myers said. "So these are some fairly major climate differences that aren't reflected in the basic ancient soil types. Yet this is what a lot of scientists, myself included, depend on for a first pass idea of paleoclimate in an area -- certain types of soils form in drier environments, others in wetter, others in cooler, that sort of thing."

That didn't hold true for the current study.

With the geochemical analysis, Myers estimated the mean average precipitation during the Jurassic for northern Montana was approximately 45 inches, 20 inches for northern Wyoming and 30 inches for New Mexico.

"This changes how we view the distribution of the types of environments in the Morrison," Myers said. "Too many times we talk about the Morrison as though it was this monolithic unit sprinkled with patchy, but similar, variations. But it's incredibly large. It spans almost 10 degrees of latitude. So it's going to encompass a lot of different environments. Regions with broadly similar climates can have internal differences, even over short distances. That's the take-home."

Myers is a postdoctoral scholar in SMU's Shuler Museum of Paleontology in the Roy M. Huffington Department of Earth Sciences, Dedman College.

The popular artistic representations we see today of dinosaurs in a landscape setting are based on bits of evidence from plant and animal fossils found in various places, Tabor said. While that's based on the best information to date, it's probably inaccurate, he said. Myers' findings provide new insights to many studies that have been done prior to his. This will drive paleontologists and geologists to seek out more quantitative data about the ancient environment.

"The geology of the Morrison has been studied exhaustively from an observational standpoint for 100 years," Tabor said. "I have no doubt there will be many more fossil discoveries in the Morrison, even though over the past century we've gained a pretty clear understanding of the plants and animals at that time. But now we can ask deeper questions about the landscape and how organisms in the ancient world interacted with their environment."

The Morrison Formation has produced some of our most familiar dinosaurs, as well as new species never seen before. Discoveries began in the late 1800s and ultimately precipitated the Bone Wars -- the fossil equivalent of California's Gold Rush.

After Myers studied dinosaur fossils from the Morrison, he became curious about the climate. Embarking on the geochemical analysis, Myers, like scientists before him, hypothesized the climate would be similar to modern zonal circulation patterns, which are driven by the distribution of the continents. Under that hypothesis, New Mexico would be relatively arid, and Wyoming and Montana both would be wetter at the time dinosaurs roamed the landscape.

"We found that, indeed, New Mexico was relatively arid," Myers said. "But the surprising part was that the Wyoming locality was more arid and had less rainfall than New Mexico, even though it was at a higher latitude, and above the mid-latitude arid belt. And the Montana locality, which is not far from the Wyoming locality, had the highest rainfall of all three. And there's a very abrupt transition between the two."

During the Jurassic, the Morrison was between 30 degrees north and 45 degrees north, which is about five degrees south of where it sits now. Its sediments were deposited from 155 to 148 million years ago. Some areas show evidence of a marine environment, but most were continental. The mean average precipitation determined for the Jurassic doesn't match our modern distribution, Myers said.

Previously scientists speculated on the climate based on qualitative measures, such as types of soils or rocks, or types of sedimentary structures, and inferred climate from that.

"I tried to find quantitative information, but no one had done it," Myers said. "There are entire volumes about Morrison paleoclimate, but not a single paper with quantitative estimates. Given the volume of important fossils that have come out of the Morrison, and how significant this formation is, it just struck me as important that it be done."

Myers classified the fossil soils according to the Mack paleosol classification, and established the elemental composition of each one to determine how much weathering the paleosols had undergone.

These findings suggest that scientists must use different approaches to quantify paleoclimate, he said.

"It's not enough to just look at soil types and draw conclusions about the paleoclimate," Myers said. "It's not even enough to look at rainfall in this quantitative fashion. There are numerous factors to consider." 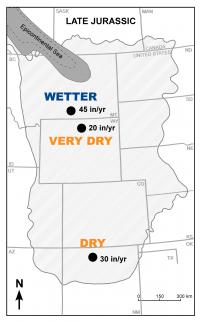