This release is available in Japanese.

Inspired by the traditional Japanese art form of Origami or "folding paper," researchers have developed a way to coax flat sheets of composite materials to self-fold into complex robots that crawl and turn.

"We demonstrated this process by building a robot that folds itself and walks away without human assistance," said Sam Felton, a Ph.D. candidate at Harvard University's School of Engineering and Applied Sciences and the Wyss Institute for Biologically Inspired Engineering and the lead author of a new report in the 8 August issue of the journal Science .

In the experiment, the researchers' robot self-assembled from flat sheets of paper and shape memory polymers (which change shape when heated above 100˚ Celsius) into which they had embedded electronics. The flat composite transformed into a dynamic, functional machine in about four minutes. It then crawled away at a speed of about 5.4 centimeters or over 2 inches, per second, and it also turned—all without human help. No previous self-folding approach has yielded a machine that can function without additional outside assistance.

This new approach, which is both efficient and versatile, allows researchers to quickly produce complex robots that are scalable to different sizes and are also very strong for their weight, the new study reports.

For the last decade, the team that worked on this approach has been looking at ways to increase the complexity of robotic devices. They started by building folding-based devices at very small scales. Despite inherent design challenges ( i.e., the skills required to fold such complex geometries), they realized the value of continuing, and creating robots at bigger, more traditional robot scales.

"Folding allows you to avoid the 'nuts and bolts' assembly approaches typically used for robots or other complex electromechanical devices and it allows you to integrate components (e.g., electronics, sensors, actuators) while flat," said Rob Wood, the Charles River Professor of Engineering and Applied Sciences Core Faculty Member at Harvard University's Wyss Institute for Biologically Inspired Engineering and the study's senior author.

Felton added that "traditional manufacturing requires expensive machinery, and 3D printing is too slow for mass production, but planar composites can be rapidly built with inexpensive tools like laser cutters and etch tanks, and then folded into functional machines. Such manufacturing methods would be ideal for producing 100-1000 units."

"These robots are inexpensive and [their] layered composites can be built faster than equivalent 3-D printed structures," Felton continued.

The researchers, who collaborated with colleagues at the Massachusetts Institute of Technology, created their robot by using parts and materials that are readily available, such as a shape-memory polymer and self-folding hinges. The hinges feature embedded heating circuits that created the heat necessary to activate the folding. The placement of these hinges in the composite, and the order in which they are triggered create a fold pattern that determines the final shape of the 3-D structure, the study reports.

3-D design software that generated detailed crease patterns in the polymer material automated the folding process. It formed creases that became connected in cyclic folds, or a collection of creases.

"Cyclic folds are used by a software program called 'Origamizer' as building blocks to create any polyhedron," explained Felton. "We've discovered that we can [use this approach] to create a wide variety of structures and machines."

In this case, the stiffness and type of the folds raised the robot's body, which propelled the legs to angle downward.

Potential uses for these self-folding, functional machines include deployment or in a search-and-rescue scenarios where they could be activated to navigate small tunnels or spaces. "[They could be delivered] through a confined passageway, such as a collapsed building, after which they would assemble into their final form autonomously," said Marc Lavine, a senior editor at Science.

The fact that they could be shipped flat in large quantities, and then assembled once onsite, makes them especially valuable. Other examples of their use include deployment into space for various forms of exploration, IKEA-style furniture that assembles upon arrival, or for self-folding shelters that rapidly assemble in disaster zones.

Yet another promising application for this technology is rapid prototyping of new designs for tiny machines that are too small to be assembled by hand.

In a related report, Jesse Silverberg from Cornell University report how they, too, used origami-based engineering to design and build a new type of lightweight, ultra-tough programmable metamaterial. The researchers explain that metamaterials are constructed out of medium-sized building blocks that are bigger than atoms, but much smaller than the structures they are used to construct and that "by adding structure at this intermediate size, previously unobtainable properties can be engineered with ease."

The researchers studied a specific type of zigzag folding pattern that has been used to efficiently pack solar panels for space missions. They used the pattern to create folded sheets, and then devised a way to structurally alter the sheets so that they could control their mechanical properties. This would allow them to create metamaterials with desirable properties, such as strength or stiffness.

"When incorporated into more complex devices, these materials will enable on-the-fly transformation of mechanical function," explained Silverberg. "We envision combining these origami-inspired materials with computer-controlled actuators to build more complex machines, such as hardening shells, locked-in joints and deployable barriers; and ultimately, this transformer technology will revolutionize the way we think about materials, moving them beyond their current static form, and revealing more functionality than what originally meets the eye."

The team, led by Cornell University’s Itai Cohen, will present the research at the Sixth International Meeting on Origami in Science, Mathematics and Education, 10-13 August, in Tokyo, Japan.

A related Perspective by Zhong You from the University of Oxford in the United Kingdom discusses additional applications in the field of origami engineering.

The American Association for the Advancement of Science (AAAS) is the world's largest general scientific society, and publisher of the journal, Science as well as Science Translational Medicine and Science Signaling . AAAS was founded in 1848, and includes some 261 affiliated societies and academies of science, serving 10 million individuals. Science has the largest paid circulation of any peer-reviewed general science journal in the world, with an estimated total readership of 1 million. The non-profit AAAS is open to all and fulfills its mission to "advance science and serve society" through initiatives in science policy; international programs; science education; and more. For the latest research news, log onto EurekAlert!, http://www.eurekalert.org, the premier science-news Web site, a service of AAAS. 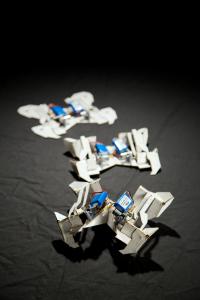 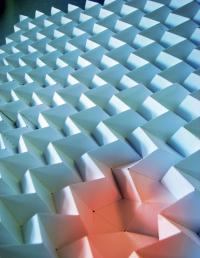