System-wide networks of proteins are indispensable for organisms. Function and evolution of these networks are among the most fascinating research questions in biology. Bioinformatician Thomas Rattei, University of Vienna, and physicist Hernan Makse, City University New York (CUNY), have reconstructed ancestral protein networks. The results are of high interest not only for evolutionary research but also for the interpretation of genome sequence data. Recently, the researchers published their paper in the renowned journal PLOS ONE.

The cells of all organisms consist mostly of proteins, which develop various functions through their complex interactions. These functions range from metabolism, maintenance and control of the cellular structure to the exchange of signals with other cells and the environment. Proteins rarely act alone – only their system-wide network makes organisms viable. "The knowledge about function and evolution of these protein networks is currently one of the most fascinating questions in biology and relevant e.g. also to cancer research", explains Thomas Rattei, Head of the Department of Computational Systems Biology at the University Center Althanstrasse.

In pursuit of the blueprint of protein networks

The combination of 20 different building blocks – amino acids – results in an enormous variety of theoretically possible protein variants; many more than the estimated number of stars in the universe. The random formation of an interaction between proteins seems therefore extremely unlikely. Thomas Rattei, Professor of In-Silico Genomics at the University of Vienna, and Hernan Makse, Professor of Physics at the City University New York (CUNY), and their teams investigate how complex and manifold protein networks could still evolve in present-day organisms.

Starting point of the joint research project was a hypothesis emphasising the importance of the duplication of proteins in the course of evolution. If the gene encoding a protein is duplicated in the genome, which often happens in evolution, original and copy will interact with the same partners in the protein network. Once original and copy diverge over time, novel proteins with individual features and own partners in the network will emerge. Interactions in the network would thereby not be newly created but evolve through duplication and divergence from simpler ancestors.

The two workgroups around bioinformatician Thomas Rattei and physicist Hernan Makse tested and improved this hypothesis in an elaborate computational experiment. They developed a novel method for the reconstruction of protein networks of extinct evolutionary ancestors from the genomes and networks of present-day species. Data of seven species from various domains of life were used: from bacteria, fungi, plants, animals to humans.

The comparison of these reconstructed ancient protein networks yielded a surprisingly clear result: the present-day networks can be explained almost exclusively through the mechanism of duplication and divergence. Novel interactions between proteins emerge on rare occasions. This principle seems to be universal in the evolution of species as it was confirmed by the data obtained from all species analysed in this study. This principle could also explain the dynamics of other biological networks and it explains special features of protein networks such as self-similarity (fractality) in a straightforward way.

Useful for the interpretation of genome sequences and evolutionary biology

The results of the joint research project of the University of Vienna and CUNY will not only be relevant for evolutionary biology. They particularly support the interpretation of genome sequence data, which has become a powerful tool in many areas of biology and medicine in the last years. This is also the goal of many other current research projects of the Department of Computational Systems Biology, which focuses on research on pathogens, microbial communities and molecular interactions between species adopting a system-oriented approach.

Publication in PLOS ONE:

Novel insights into the evolution of protein networks 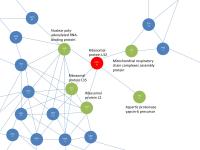