Nagoya, Japan - Chemists have tried to synthesize carbon nanobelts for more than 60 years, but none have succeeded until now. A team at Nagoya University reported the first organic synthesis of a carbon nanobelt in Science. Carbon nanobelts are expected to serve as a useful template for building carbon nanotubes and open a new field of nanocarbon science.

The new nanobelt, measuring 0.83 nanometer (nm) in diameter, was developed by researchers at Nagoya University's JST-ERATO Itami Molecular Nanocarbon Project, and the Institute of Transformative Bio-Molecules (ITbM). Scientists around the world have tried to synthesize carbon nanobelts since the 1950s and Professor Kenichiro Itami's group has worked on its synthesis for 12 years.

"Nobody knew whether its organic synthesis was even possible or not," says Segawa, one of the leaders of this study who had been involved in its synthesis for 7 and a half years. "However, I had my mind set on the synthesis of this beautiful molecule."

Carbon nanobelts are belt-shaped molecules composed of fused benzene rings, which are aromatic rings consisting of six carbon atoms. Carbon nanobelts are a segment of carbon nanotubes, which have various applications in electronics and photonics due to their unique physical characteristics.

Carbon nanobelts have been identified as a way to build structurally uniform carbon nanotubes. However, synthesizing carbon nanobelts is challenging due to their extremely high strain energies. This is because benzene is stable when flat, but becomes unstable when they are distorted by fusion of the rings.

"The most difficult part of this research was this key coupling reaction of the macrocycle precursor," says Povie. "The reaction did not proceed well day after day and it took me three to four months for testing various conditions. I have always believed where there's a will, there's a way."

In 2015, Itami launched a new initiative in his ERATO project to focus particularly on the synthesis of the carbon nanobelt. At the so-called "belt festival," various new synthetic routes for the carbon nanobelt were proposed and more than 10 researchers were involved in the project. On September 28, 2016, exactly a year after the start of the festival, the carbon nanobelt structure was finally revealed by X-ray crystallography in front of the Itami group members. Everyone held their breath while staring at the screen during X-ray analysis, and cheered when the cylindrical shape image of the carbon nanobelt appeared on the screen. Itami, Segawa and Povie expressed their joy with a high five (movie: https://www.youtube.com/watch?v=cABZla9w0uo).

"It was one of the most exciting moments in my life and I will never forget it," says Itami. "Since this is the result of a decade-long study, I greatly appreciate all the past and current members of my group for their support and encouragement. Thanks to their skill, toughness, sense and strong will of all members, we achieved this successful result."

The synthesized carbon nanobelt is a red-colored solid and exhibits deep red fluorescence. Analysis by X-ray crystallography revealed that the carbon nanobelt has a cylindrical shape in the same manner as carbon nanotubes. The researchers also measured its light absorption and emission, electric conductivity and structural rigidity by ultraviolet-visible absorption fluorescence, and Raman spectroscopic studies, as well as theoretical calculations.

JST-ERATO Itami Molecular Nanocarbon Project was launched at Nagoya University in April 2014. This is a 5-year project that seeks to open the new field of nanocarbon science. This project entails the design and synthesis of as-yet largely unexplored nanocarbons as structurally well-defined molecules, and the development of novel, highly functional materials based on these nanocarbons. Researchers combine chemical and physical methods to achieve the controlled synthesis of well-defined uniquely structured nanocarbon materials, and conduct interdisciplinary research encompassing the control of molecular arrangement and orientation, structural and functional analysis, and applications in devices and biology. The goal of this project is to design, synthesize, utilize, and understand nanocarbons as molecules. 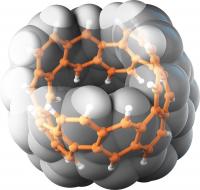 Stucture of a Carbon Nanobelt