Tropical Storm Isaias made landfall late on Aug. 3 and by today, Aug. 4, the huge storm stretched from Virginia to Maine. NASA satellites have been providing forecasters with rainfall rates, cloud top temperatures, storm extent and strength as Isaias batters the U.S. East Coast.

Warnings and Watches for Tuesday, August 4, 2020

NOAA's National Hurricane Center (NHC) posted many warnings and watches on Aug. 4. Storm Surge Warning is in effect for the Pamlico and Albemarle Sounds, Ocracoke Inlet, North Carolina to the North Carolina/Virginia border.

On Aug. 3 at 2:47 p.m. EDT (1847 UTC) NASA's Aqua satellite analyzed Isaias using the Atmospheric Infrared Sounder or AIRS instrument. The infrared data showed the bulk of the storms wrapped from west to north to east of the center of circulation. AIRS found coldest cloud top temperatures as cold as or colder than minus 63 degrees Fahrenheit (minus 53 degrees Celsius). NASA research has shown that cloud top temperatures that cold indicate strong storms that have the capability to create heavy rain. That heavy rain brought flooding to areas of South and North Carolina as the storm approached for landfall.

Coldest cloud top temperatures were as cold as or colder than minus 70 degrees Fahrenheit (minus 56.6 degrees Celsius) in some of the bands of thunderstorms north of Isaias's center and were over parts of Virginia, Pennsylvania, Maryland, Delaware, and over the Atlantic Ocean. Storms with cloud top temperatures that cold have the capability to produce heavy rainfall.

That rainfall potential is evident in the NHC forecast for Aug. 4. The following rainfall accumulations are expected along and near the track of Isaias: central and eastern North Carolina into the Mid-Atlantic: 3 to 6 inches, isolated totals a maximum of 8 inches; eastern New York into Vermont: 2 to 4 inches, isolated maximum totals 6 inches; and western Connecticut, western Massachusetts, New Hampshire and western Maine: 1 to 3 inches.

Status of Isaias on Aug. 4

At 8 a.m. EDT (1200 UTC), the center of Tropical Storm Isaias was located over southeastern Virginia near latitude 37.7 degrees north and longitude 76.8 degrees west. That is about 15 miles (20 km) south-southeast of Tappahannock, Virginia.

Isaias is moving toward the north-northeast near 33 mph (54 kph), and this general motion accompanied by some additional increase in forward speed is expected through today. Maximum sustained winds are near 70 mph (110 kph) with higher gusts. The estimated minimum central pressure based on surface observations is 993 millibars.

In the 7 a.m. EDT hour, the National Weather Service reported sustained winds of 63 mph (101 kph) and a gust to 77 mph (124 kph) at Third Island, Virginia, at the mouth of the Chesapeake Bay.

NHC noted, "In addition to the storm surge and wind threats, Isaias is expected to produce heavy rainfall along and just west of the I-95 corridor today, and the Weather Prediction Center has placed a portion of this area in a high risk for life-threatening flash flooding. There is also a risk of tornadoes from southeast Virginia to New Jersey through midday. The risk of tornadoes will spread northward into southeastern New York this afternoon and across New England by tonight."

Only gradual weakening is anticipated while Isaias moves north northeastward near the mid-Atlantic coast today. A faster rate of weakening is expected to begin tonight, and the system is forecast to become post-tropical tonight or early Wednesday. On the NHC forecast track, the center of Isaias will continue to move near or along the coast of the mid-Atlantic states today, and move across the northeastern United States into southern Canada tonight. 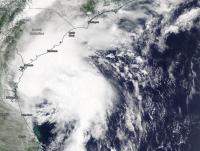 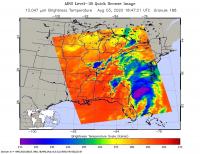