In 2016, researchers observed that they could reprogram the behavior of the Florida carpenter ant Camponotus floridanus. This species has two distinct castes with nearly identical genetic makeup: smaller Minor workers who forage and nurse the ant brood and larger Major worker soldiers that defend the colony. On November 12 in the journal Molecular Cell, the same group reports that ant castes are determined by epigenetic influences. Specifically, they discover that the neural repressor, known as CoRest, is a major contributor to influencing forager or worker behaviors.

"We view this as an epigenetic mechanism," says senior author Shelley Berger, whose laboratory at the University of Pennsylvania studies genome regulation and the influence of epigenetics in cancer, aging, and neurodegenerative disease. "The genomes are nearly identical, much like how the genome is the same in our tissues and organs. There are epigenetic changes that lead to cell differentiation, so we want to know what the epigenetic mechanisms are that are driving this dramatic difference at the organismal level in these ants."

In the 2016 experiments, by injecting the ants with the histone deacetylase (HDAC) inhibitor trichostatin A (TSA), Berger and her colleagues could reprogram the Major worker ants to act more like foraging Minors. To dive deeper into the precise epigenetic mechanism involved with these ants, the researchers injected TSA at specific times in early adulthood and performed more specific tests designed to measure markers of epigenetic activity, such as chromatin marks, as well as their gene expression.

Early on, they identified the neural repressor known as CoRest. When the Majors were reprogrammed with TSA, they noticed that Major ants started acting like Minor foragers, and many genes were turned on in the reprogrammed Majors that are usually on only in Minors. "We also saw that CoRest is upregulated in these Major ants," says first author Karl Glastad (@Laevorotatory), a postdoctoral researcher the University of Pennsylvania.

Gene expression testing during the reprogramming phase showed that CoRest repressed enzymes that degrade juvenile hormone (JH). JH is naturally elevated in Minors. When they compared the natural Minors with the reprogrammed Majors, they saw mirrored patterns: high CoRest, high JH levels, and low JH degradation. "This is pretty strong evidence that chromatin regulation through CoRest is playing a major role in differentiating social behavior in these ants," says Glastad.

The team found that reprogramming could only be accomplished in a short window. In this paper, they could reprogram the Major soldier to forage up to a maximum of five days after hatching. At 10 days, reprogramming is impossible. "This means there is transient epigenetic plasticity that is linked to a long-lasting behavioral change," says Berger. "And it shows that an epigenetic mechanism can influence complex social behavior."

"The importance of timing, hormones, and how epigenetics regulates hormones all coalesce in this study," adds Glastad. "What we've shown here in one case with ants is how this is epigenetically regulated at a very punctuated time, and we think there are parallels in other species."

CoRest is found widely throughout animal species, all the way up through mammals, including humans. It is known to repress unwanted neural genes, but this is some of the first evidence that it has a role in directing behaviors. "We believe the activity of CoRest is highly conserved in Hymenoptera (ants, bees, wasps)," adds Berger. "They all have this complex sociality that is so fascinating, and we are using it because we think of it as a simple model to try and understand how complex sociality can be regulated."

Moving ahead, the team will study single cells in the brain looking at epigenetic changes at the cellular level. "We are trying to understand which cell types in the brain are being individually regulated," says Berger, "since we have some interesting early data that this change in CoRest regulation is occurring in a very specific cell type in the brain." 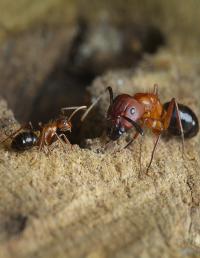