Two reports from the Prospective Urban and Rural Epidemiologic (PURE) study published in the Lancet and presented together at the ESC Congress 2019 provide unique information on [1] common disease incidence, hospitalisation and death, and [2] modifiable cardiovascular risk factors, in middle-aged adults across 21 High-Income, Middle-Income, and Low-Income Countries (HIC, MIC, LIC).

Cardiovascular Disease (CVD) remains the leading cause of mortality among middle aged adults globally, accounting for 40% of all deaths, but this is no longer the case in HIC, where cancer is now responsible for twice as many deaths as CVD, according to a new report [1] from the PURE study published in The Lancet and presented at the ESC Congress 2019 [3]. It was estimated that 55 million deaths occurred in the world in 2017, of which approximately 17·7 million were due to cardiovascular disease (CVD) [see infographic 1].

The PURE study is the only large prospective international cohort study that involves substantial data from a large number of MIC and LIC, as well as HIC, and employs standardised and concurrent methods of sampling, measurement and follow-up.

The first report, which followed 162,534 middle-aged adults (aged 35 - 70, 58% women) in 4 HIC, 12 MIC and 5 LIC over a median of 9.5 years (between 2005 - 2016), found that CVD related deaths were 2.5 times more common in middle-aged adults in LIC compared with in HIC, despite LIC experiencing a substantially lower burden of CVD risk factors compared with wealthier countries. Authors suggested that higher CVD related mortality in LIC may be mainly due to lower quality of healthcare, given that the report found first hospitalisation rates and CVD medication use to be both substantially lower in LIC and MIC, compared with in HIC.

"The world is witnessing a new epidemiologic transition among the different categories of non-communicable diseases (NCD), with CVD no longer the leading cause of death in HIC," said Dr. Gilles Dagenais, Emeritus Professor at Laval University, Quebec, Canada and lead author of the first report. "Our report found cancer to be the second most common cause of death globally in 2017, accounting for 26% of all deaths. But as CVD rates continue to fall, cancer could likely become the leading cause of death worldwide, within just a few decades." [4]

While the study found the incidence of CVD per 1000 person years to be 7·1, 6·8 and 4·3 in LIC, MIC, and HIC respectively, it conversely found cancer, pneumonia, COPD and injuries to each be least common in LIC and most common in HIC. Overall mortality rates were twice as high in LICs compared with MIC, and four times higher in LICs compared with HIC, though rates of deaths from cancer were similar across all country income levels.

Dr Salim Yusuf, Professor of Medicine, McMaster University, and Principal Investigator of the study remarked: "While long-term CVD prevention and management strategies have proved successful in reducing the burden in HIC, a change in tack is required to alleviate the disproportionately high impact of CVD in LIC and MIC. Governments in these countries need to start by investing a greater portion of their Gross Domestic Product in preventing and managing non- communicable diseases including CVD, rather than focussing largely on infectious diseases." [4]

About 70% of CVD cases and deaths due to modifiable risks

A further report [2] from the PURE study, also published in The Lancet and presented simultaneously at the ESC Congress 2019, explored the relative contribution (population attributable factor, or PAF) of 14 modifiable risk factors to CVD, among 155,722 community-dwelling, middle-aged people without a prior history of CVD, within the same 21 HIC, MIC and LIC [see infographic 2].

Overall, modifiable risk factors, including metabolic, behavioural, socioeconomic and psychosocial factors, strength and environment, accounted for 70% of all CVD cases globally. Metabolic risk factors were the largest contributory risk factor globally (41.2%), with hypertension (22.3%) the leading factor within this group.

However, the relative importance of risk factors for CVD cases and death varied widely between countries at different stages of economic development. For deaths, the largest group of PAFs overall were for behavioural risk factors (26·3%), but in MIC and LIC, the importance of household air pollution, poor diet, low education, and low grip strength were substantially larger compared to their impact in HIC. In line with the findings of the first report [1], metabolic risk factors including high cholesterol, abdominal obesity or diabetes, played a larger role in causing CVD in HIC, compared with in LIC.

"We have reached a turning point in the development of CVD prevention and management strategies," said Annika Rosengren, Professor of Medicine from Goteborg, Sweden. Sumathy Rangarajan, who coordinated the study said "While some risk factors certainly have large global impacts, such as hypertension, tobacco, and low education, the impact of others, such as poor diet, household air pollution, vary largely by the economic level of countries. There is an opportunity now to realign global health policies and adapt them to different groups of countries based on the risk factors of greatest impact in each setting." [4]

Dr Philip Joseph, Associate Professor of Medicine at McMaster University and the co-lead of the paper concluded: "Efforts to tackle CVD through focusing on a small number of behavioural risk factors, such as reducing smoking, are important, but these efforts should expand to better Blood Pressure control and better use of secondary prevention, with simple and effective low-cost medications." [4]

Authors of both studies acknowledged some limitations. Despite being the only studies involving as many as 21 countries in a cohort study, caution should be exercised in generalising results to all countries. In particular, PURE does not include data from west Africa, north Africa or Australia; the number of participants from the Middle East is modest; and data from LICs are predominantly from south Asia with a few African countries.

"However, the inclusion of nearly 900 urban and rural communities from multiple countries in different regions of the world provides substantial diversity of risk factors and contextual variables and makes it likely that the PURE results are more broadly applicable than most previous studies", said Dr Tony Dans from Manila, Philippines.

Despite limitations, Stephanie H Read & Sarah H Wild conclude in a Linked Comment: "[These] findings can inform the effective use of limited resources--for example, by indicating the importance of improving education across the world and improving diet and reducing household air pollution in less developed countries. The value of collecting similar data to inform policy in a wider range of countries is clear, while improving lifestyle choices and modifying their social and commercial determinants remain a challenge." 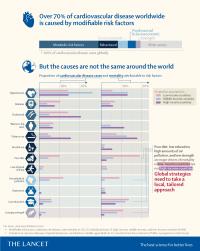