Moisture is the main environmental factor that triggers the degradation of the masterpiece The Scream (1910?) by Edvard Munch, according to the finding of an international team of scientists led by the CNR (Italy), using a combination of in situ non-invasive spectroscopic methods and synchrotron X-ray techniques. After exploiting the capability of the European mobile platform MOLAB in situ and non-invasively at the Munch Museum in Oslo, the researchers came to the ESRF, the European Synchrotron (Grenoble, France), the world's brightest X-ray source, to carry out non-destructive experiments on micro-flakes originating from one of the most well-known versions of The Scream. The findings could help better preserve this masterpiece, which is seldom exhibited due to its degradation. The study is published in Science Advances.

The Scream is among the most famous paintings of the modern era. The now familiar image is interpreted as the ultimate representation of anxiety and mental anguish. There are a number of versions of The Scream, namely two paintings, two pastels, several lithographic prints and a few drawings and sketches. The two most well-known versions are the paintings that Edvard Munch created in 1893 and 1910. Each version of The Scream is unique. Munch clearly experimented to find the exact colours to represent his personal experience, mixing diverse binding media (tempera, oil and pastel) with brilliant and bold synthetic pigments to make 'screaming colours'. Unfortunately, the extensive use of these new coloured materials poses a challenge for the long-term preservation of Munch's artworks.

The version of the Scream (1910?) that belongs to the Munch Museum (Oslo, Norway) clearly exhibits signs of degradation in different areas where cadmium-sulfide-based pigments have been used: cadmium yellow brushstrokes have turned to an off-white colour in the sunset cloudy sky and in the neck area of the central figure. In the lake, a thickly applied opaque cadmium yellow paint is flaking. Throughout its existence, several elements have played a role in the deterioration of the masterpiece: the yellow pigments used, the environmental conditions and a theft in 2004, when the painting disappeared for two years.

Since the recovery of the painting after the theft, the masterpiece has rarely been shown to the public. Instead, it is preserved in a protected storage area in the Munch Museum, in Norway, under controlled conditions of lighting, temperature (about 18°C) and relative humidity (about 50%).

An international collaboration, led by the CNR (Italy), with the University of Perugia (Italy), the University of Antwerp (Belgium), the Bard Graduate Center in New York City (USA), the European Synchrotron (ESRF, France), the German Electron Synchrotron (DESY, Hamburg) and the Munch Museum, has studied in detail the nature of the various cadmium-sulfide pigments used by Munch, and how these have degraded over the years.

The findings provide relevant hints about the deterioration mechanism of cadmium-sulfide-based paints, with significant implication for the preventive conservation of The Scream.

"The synchrotron micro-analyses allowed us to pinpoint the main reason that made the painting decline, which is moisture. We also found that the impact of light in the paint is minor. I am very pleased that our study could contribute to preserve this famous masterpiece", explains Letizia Monico, one of the corresponding authors of the study.

Hitting the right formula for preservation

Monico and her colleagues studied selected cadmium-sulfide-based areas of The Scream (1910?), as well as a corresponding micro-sample, using a series of non-invasive in-situ spectroscopic analyses with portable equipment of the European MOLAB platform in combination with the techniques of micro X-ray diffraction, X-ray micro fluorescence and micro X-ray absorption near edge structure spectroscopy mainly at the ESRF, the European Synchrotron, in France, the world's most powerful synchrotron. The study of the painting was integrated with investigations of artificially aged mock-ups. The latter were prepared using a historical cadmium yellow pigment powder and a cadmium yellow oil paint tube that belonged to Munch. Both mock-ups had a similar composition to the lake in the painting. "Our goal was to compare the data from all these different pigments, in order to extrapolate the causes that can lead to deterioration", says Monico.

The study shows that the original cadmium sulfide turns into cadmium sulfate in the presence of chloride-compounds in high-moisture conditions (relative humidity, or RH ?95%). This happens even if there is no light.

"The right formula to preserve and display the main version of The Scream on a permanent basis should include the mitigation of the degradation of the cadmium yellow pigment by minimising the exposure of the painting to excessively high moisture levels (trying to reach 45% RH or lower), while keeping the lighting at standard values foreseen for lightfast painting materials. The results of this study provide new knowledge, which may lead to practical adjustments to the Museum's conservation strategy", explains Irina C. A. Sandu, conservation scientist at the Munch Museum.

"Today the Munch Museum stores and exhibits Edvard Munch's artworks at a relative humidity of about 50% and at a temperature of around 20 °C. These environmental conditions will also apply to the new Munch Museum to be opened in Spring 2020. That said, the Museum will now look into how this study may affect the current regime. Part of such a review will be to consider how other materials in the collection will respond to possible adjustments", adds Eva Storevik Tveit, paintings conservator at the Munch Museum.

Cadmium-sulfide-based yellows are not only present in Munch's artwork but also in the work of other artists contemporary to him, such as Henri Matisse, Vincent van Gogh and James Ensor.

"The integration of non-invasive in-situ investigations at the macro-scale level with synchrotron micro-analyses proved its worth in helping us to understand complex alteration processes. It can be profitably exploited for interrogating masterpieces that could suffer from the same weakness", reports Costanza Miliani, coordinator of the mobile platform MOLAB (operating in Europe under the IPERION CH project) and second corresponding author of this study.

Monico and colleagues, especially Koen Janssens (University of Antwerp), have a long-standing collaboration with the ESRF, the European Synchrotron, and in particular with the scientist Marine Cotte, to investigate these pigments and the best way to preserve the original masterpieces.

"At the ESRF, ID21 is one of the very few beamlines in the world where we can perform imaging X-ray absorption and fluorescence spectroscopy analysis of the entire sample, at low energy and with sub-micrometer spatial resolution", explains Janssens.

"EBS, the new Extremely Brilliant Source, the first-of-a-kind high-energy synchrotron, which is under commissioning at the moment at the ESRF, will further improve the capabilities of our instruments for the benefit of world heritage science. We will be able to perform microanalyses with increased sensitivity, and a greater level of detail. Considering the complexity of these artistic materials, such instrumental developments will highly benefit the analysis of our cultural heritage", adds Cotte, ESRF scientist and CNRS researcher director.

"This kind of work shows that art and science are intrinsically linked and that science can help preserve pieces of art so that the world can continue admiring them for years to come", concludes Miliani, coordinator of MOLAB.

Researchers find the key to preserving The Scream 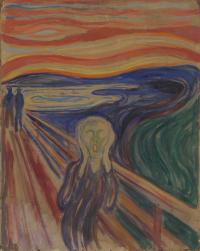 During the Experiments at the ESRF