Herons nesting in the wetlands of southeast Chicago are still being exposed to chemicals banned in the U.S. in the 1970s, a research team reports. The chemicals do not appear to be affecting the birds’ reproductive success, however.

The findings appear in the current issue of the Journal of Great Lakes Research.

University of Illinois veterinary biosciences scientist Jeff Levengood led the study. Levengood, a wildlife toxicologist at the Illinois Natural History Survey, said that chemicals banned 30 years ago for their deleterious effects on wildlife are still showing up in the offspring of black-crowned night-herons in a Chicago wetland.

The researchers found PCBs and DDE in the eggs of night-herons nesting in the wetlands abutting Lake Calumet, in southeast Chicago. The Lake Calumet wetlands are surrounded by industrial developments along Lake Michigan near the Illinois-Indiana border.

The research team included scientists from the U.S. Geological Survey, the Illinois Waste Management and Research Center, and Purdue and Duke universities.

PCBs (polychlorinated biphenyls) were commonly used in electrical transformers and other industrial applications until they were banned in 1977 because of their toxicity in the environment.

DDE is a metabolic by-product of DDT (dichlorodiphenyltrichloroethane), a pesticide banned in 1972 because it was observed to kill or disrupt the reproduction of birds and other wildlife. The DDT ban is believed to have reversed the dramatic decline in the American bald eagle and the peregrine falcon in the continental U.S.

The Lake Calumet birds appear to be picking up the contamination primarily from Lake Michigan by means of an invasive fish, the alewife.

Alewives harbor comparable levels of PCBs and DDE in their tissues, Levengood said. The spawning season of the alewife in Lake Michigan coincides with the nesting season of the night-herons.

“The alewife come to shore to spawn when the first warm waters of spring run into the lake and the temperature starts to rise,” he said. “There are untold millions of these things along the (Lake Michigan) shore in April.”

On several occasions the researchers saw large numbers of night-herons – “in some cases a hundred birds or more” – along the sea walls on the southwest shore of Lake Michigan, Levengood said. “They’d be standing there peering into the water, and then they’d kind of do a belly flop into the water and grab a fish.”

The researchers collected data over two years and conducted several genetic, biochemical and reproductive analyses to determine whether the chemical exposures were adversely affecting the birds. They looked at DNA strand length (a measure of genetic damage) and oxidative stress (a contributor to aging and disease) and compared the number of eggs and the viability of the eggs and young chicks to those in other, less polluted reference colonies of black-crowned night-herons in Minnesota and Virginia.

“These were all normal compared to the reference colonies,” Levengood said.

The team found no evidence of eggshell-thinning, which is sometimes associated with exposure to DDE.

“So that’s the good news: Even though they’re getting an exposure, it’s not enough to cause problems – at least in those parameters we measured,” Levengood said.

The researchers did see an increase in some liver enzymes, he said, “but that’s not unexpected because the liver is trying to detoxify these compounds.” The long-term consequences of the rise in these liver enzymes are unknown, he said.

Populations of black-crowned night-herons in the Lake Calumet wetlands have fluctuated dramatically in the last 20 years, peaking at more than 1,500 birds in the early to mid-1990s. This population increase coincided with prolonged flooding in nearby rivers, which may have disadvantaged these short-legged herons, Levengood said.

Birders counted 447 black-crowns in Lake Calumet wetlands in 2005, the last year for which data are available.

Many of the remaining heron colonies are found in or near industrial areas, Levengood said.

“Wetlands have persisted in these areas because they were out on the back 40 of some company and people generally didn’t have access,” he said. These urban industrialized sites provide needed habitat, Levengood said, but are also “contaminated and degraded.”

Urbanites are beginning to discover these areas, and want to clean them up for wildlife – and humans – to use, he said. Chicago’s Department of Environment is leading a drive to reclaim parts of the Lake Calumet wetlands, an effort that prompted the current study.

Herons persist in Chicago wetlands despite exposure to banned chemicals 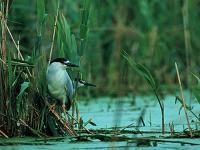 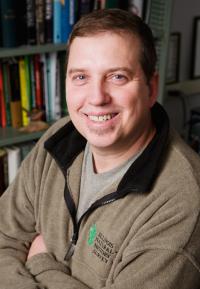