Tomato plants deter attacks from a parasitic plant that's known to ravage crops by detecting one of its peptides, a new study reveals. Worldwide, parasitic plants cost billions of dollars in crop losses, but a better understanding of how some plants fend off invaders could help efforts to mitigate these losses. Cuscuta reflexa is a parasitic, leafless vine that infects the stems of most dicotyledonous plants -one exception is Solanum lycopersicum, a species of tomato. Plants are sometimes able to detect disease-causing microbes by the distinct peptides that these invading plants release, which prompts the host plant to secrete the stress-related hormone ethylene. Here, Volker Hegenauer et al. suspected that the S. lycopersicum tomato may take a similar strategy when facing the plant parasite C. reflexa, which they confirmed. The tomato plant was hypersensitive to C. reflexa extract, yet three other control plant species were not. By analyzing natural variation between S. lycopersicum and a wild tomato species, the researchers identified the receptor behind this sensitivity, which they named Cuscuta receptor 1 (CuRe1). When the team induced expression of the corresponding gene in the leaves of two other plant species (one closely related to S. lycopersicum and the other more distantly related), both plants reacted to presence of the C. reflexa peptide with increased production of ethylene, and exhibited increased resistance to C. reflexa infestation. The authors note, however, that sensitivity to CuRe1 alone does not drive this immunity to C. reflexa, since some strains of tomato lacking sensitivity to CuRe1 are still resistant to infection by the parasite. A Perspective by Vardis Ntoukakis and Selena Gimenez-Ibanez discusses these findings in greater detail.

Tomatoes resist a parasitic vine by detecting its peptide 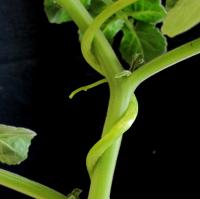