Animals, like humans, make various decisions based on information from the environment: for example, what to eat, where to go, and who to mate. Such decision-making is thought to be characterized by (1) distinct choice of one option based on gradually changing and/or confusing environmental information and (2) the choice is quick when the information is clear but slow when unclear. Researches on decision-making from neurobiological aspect have been performed by using monkeys and rodents, although the details of the mechanisms have been unclear because their brain consists of more than hundreds of millions of nerve cells.

Tanimoto, Yamazoe-Umemoto and colleagues discovered that a tiny roundworm with only 302 nerve cells do "decision-making" during escape response from the aversive odor. Moreover, they found that the worms make decisions by calculating mathematical integration of the odor's information. First, the research team set up a robotic microscope that simultaneously measures the nerve activity and behavior of a worm in the virtual odor space. The nerve cell's activity was measured via concentration of calcium ion in the cell, and the team analyzed the changes in calcium concentration using a mathematical model.

Using the robotic microscope system, they found that, when a worm is trying to find out the favorable direction to move away from the odor, the calcium concentration in a nerve cell raises slowly according to the mathematical integration of the amount of decrease in the odor concentration, that is, it adds up for a certain period of time. And when the calcium concentration reaches to a certain value, the worm choose the direction as a "deliberate" decision. In contrast, when a worm happens to move in the unfavorable direction where the aversive odor increases, the calcium in another nerve cell raises rapidly according to the mathematical differentiation of the odor concentration for a rapid "reflex"-like response. Furthermore they found genes that enable the integration and/or differentiation.

In researches using the more complex animals, it is known that certain nerve cells in the brain integrate information and make a decision when reaching a certain level, which likely occurs also in humans. The research team's result showed that, surprisingly, the worm's nerve cell also integrates information for decision-making. A human gene similar to the one found in worms may also be involved in our decision-making.

Calcium dynamics regulating the timing of decision-making in C. elegans 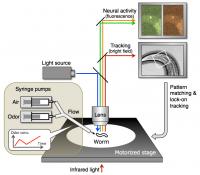