The discovery of a four-legged fossil of a snake hints that this suborder may have evolved from burrowing, rather than marine, ancestors. The unique four-legged specimen, found in Brazil's Crato Formation, provides us with more insight into how these creatures transitioned into the sleek, slithering reptiles that we are familiar with - and often fearful of - today. By analyzing both the genetics and the morphological features of this species compared to other known snake species, and giving different weight to each factor in four separate analyses, the authors determined that the four-legged creature is in fact an ancestor of modern-day snakes. The newly discovered species Tetrapodophis amplectus, which lived during the Early Cretaceous 146 to 100 million years ago, maintains many classic snake features, such as a short snout, long braincase, elongated body, scales, fanged teeth and a flexible jaw to swallow large prey. It also maintains the typical vertebrae structure seen in modern-day snakes that allows for the extreme flexibility required to constrict prey. The main, glaring difference is Tetrapodophis's four limbs, which do not appear to have been used for locomotion. Rather, the shorter exterior digits and lengthened second digit suggest that the limbs were used for grasping, the authors say, either to seize prey or to clasp during mating. The authors also note that the specimen lacks the long, laterally compressed tail typically found in aquatic animals, further suggesting that snakes did not evolve from marine ancestors. Thus, this intriguing fossil hints at how snakes eventually slithered their way into the modern world. A Perspective by Susan Evans discusses the fossil in more detail. 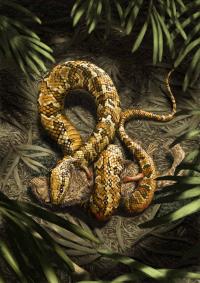 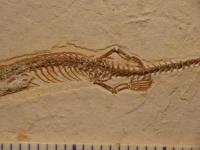