Osaka, Japan - No matter how much we try and fight it, aging is a part of life. High cholesterol, diabetes, and fatty liver, the collection of conditions referred to as lifestyle diseases, all become more commonplace as we get older. Interestingly, however, many of these age-related conditions are caused by changes inside adipocytes, the fat cells responsible for storing excess energy.

Now, in a study published in Nature Communications, researchers led by Osaka University have uncovered exactly how these changes lead to the onset of lifestyle diseases, with an eye to reversing the process.

"Adipocytes produce hormones and cytokines that regulate the function of other metabolic organs," explains study lead author Tadashi Yamamuro. "Age-related changes in adipose tissue result in metabolic disorders that are closely associated with life-threatening cardiovascular diseases. However, no one really knows what causes adipocyte dysfunction in aged organisms."

The research team decided to focus on autophagy, the process used by cells to eliminate unwanted or dysfunctional cellular components. Previous studies had shown that autophagy plays an important role in the prevention of various age-related disorders and is likely to be involved in the aging process. But most pertinent was the finding that autophagy is essential for the normal function and longevity of normal organs, such as liver or kidney.

Says Yamamuro, "We previously showed that a protein called Rubicon, which inhibits autophagy, is upregulated in aging tissues. We therefore hypothesized that Rubicon likely accumulates in aged adipocytes, decreasing autophagic activity and contributing to the onset of metabolic disorders."

Surprisingly though, the researchers found that Rubicon levels were actually decreased in the adipose tissue of aged mice, resulting in increased autophagic activity.

To dig deeper into the underlying mechanism, the researchers developed a mouse line in which Rubicon was specifically inactivated in adipose tissue.

"In the absence of Rubicon, we observed excessive autophagy in adipocytes and a decline in adipocyte function," explains senior author Tamotsu Yoshimori. "As a result, the mice developed lifestyle diseases such as diabetes and fatty liver and had significantly higher cholesterol levels, despite being fed the same diet as control animals."

The researchers went on to identify the specific proteins affected by the increased levels of autophagy, showing that supplementation of these proteins in the Rubicon deletion mice restored adipocyte function.

"This is a really exciting discovery with important therapeutic implications," says Yoshimori. "Because age-dependent loss of adipose Rubicon causes lifestyle diseases via excess autophagy, inhibiting autophagy in adipocytes may help prevent the onset of these prevalent and potentially life-threatening conditions."

Is turning back the clock in aging fat cells a remedy for lifestyle diseases? 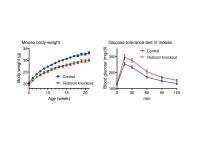 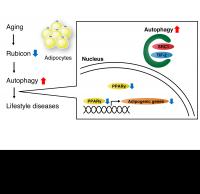