In our body, unnecessary cells are removed by regulated cell death. Understanding of the mechanism underlying regulated cell death is critical for the development of therapies for many diseases. Professor Nakano's research group has demonstrated that Mind bomb-2 (MIB2), a ubiquitin ligase, binds to and directly ubiquitinates the cell death suppressor protein cFLIP (Cellular FLICE-inhibitory protein). cFLIP is encoded by CFLAR gene; alternative splicing results in two forms, the long form (cFLIPL) and the short form (cFLIPs). cFLIPL plays a dominant role in suppression of cell death. In MIB2-deficient cells, cFLIPL ubiquitination was attenuated, but its degradation was rather decreased, indicating that MIB2-mediated ubiquitination does not promote cFLIPL degradation. Intriguingly, TNF-induced apoptosis was enhanced in MIB2-deficient cells. Taken together, these results show that MIB2-mediated ubiquitination is necessary for cFLIPL to inhibit cell death. cFLIPL has previously been shown to associate with caspase 8 and inhibit apoptosis. Ubiquitination of cFLIPL by MIB2 may alter the higher-order structure of the complex containing caspase 8, preventing it from forming a large complex, thereby preventing caspase 8 association (Fig. 1).

"The protein cFLIPL has been known to play a central role in the regulation of cell death. We screened hundreds of ubiquitin ligases for the ones that interact with cFLIP protein, and found MIB2. MIB2 has been known to be involved in the Notch signaling pathway," Dr. nakabayashi, lead author of the study said. "Here we found a new role for this ubiquitin ligase. Our study has revealed for the first time that MIB2 is a ubiquitin ligase that acts on cFLIPL, and cFLIPL ubiquitination by MIB2 is essential for the cFLIP's function in suppressing cell death signaling. This research encourages future development of cell death-promoting drugs targeting the interaction between MIB2 and cFLIPL."

"Abnormalities in cell death regulation have been observed in various diseases, including cancers and neurodegenerative diseases. Our study suggests that if we can pharmacologically inhibit cFLIP ubiquitination, we may be able to induce cell death more efficiently in cancer cells," said Prof. Nakano, senior author of the study.

These results were published in Communications Biology, on January 19, 2021. This research was conducted in collaboration with Prof. Tatsuya Sawasaki of Ehime University, Dr. Yasushi Saeki of Tokyo Metropolitan Institute of Medical Science, Dr. Fumiaki Ohtake of Hoshi University, and Prof. Fuminori Tokunaga of Osaka City University. 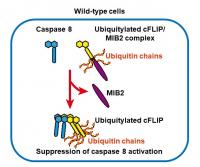