Berkeley -- University of California, Berkeley, graduate student Alistair Boettiger has amassed a beautiful collection of seashells, but not by combing the beach. He created them in his computer.

He and George Oster, a UC Berkeley biophysicist, along with University of Pittsburgh mathematical neuroscientist Bard Ermentrout, have written a computer program that generates the complex patterns of seashells using simple principles developed to explain how the brain works and how memories are stored.

The "neural net" model explains how mollusks build their seashells based on the finding that the mollusk's tongue-like mantle, which overlaps the edge of the growing shell, senses or "tastes" the calcium carbonate layer laid down the day before in order to generate a new layer.

"The pattern on a seashell is the mollusk's memories," said Oster, a professor of environmental science, policy and management and of molecular and cell biology. "The shell is laid down in layers, so the mantle is sensing the history of the mollusk's 'thoughts' and extrapolating to the next layer, just like our brains project into the future."

The studies may help neuroscientists understand how neural networks work in the brain and throughout the body, where neural nets cover our skin and all internal organs.

The researchers' computer model, published this week in the early online edition of the journal Proceedings of the National Academy of Sciences, reproduces nearly all known shell shapes, ranging from scallops to whelks, and nearly all the shell patterns that make beachcombing so popular.

"The model gives us a remarkable ability to explain much of the dramatic diversity of both shape and pattern that we see in the natural world," Boettiger said.

To build their model, the UC Berkeley scientists first studied electron microscope images of mollusk mantles in order to understand the network of neurons connecting the sensing cells in the mantle with the secretory cells that produce calcium carbonate and proteins – many of them colored pigments – incorporated into the growing shell. Different rates of calcium carbonate secretion determine the shape of the spiral, while different amounts of pigment secretion create a pattern unique to each species.

They then modeled the size of the excitatory and inhibitory regions surrounding the secretory cells and the cells' firing thresholds – nine parameters in all – as a neural network that determines how much calcium and pigment is secreted.

Based solely on these nine parameters, Boettiger, Oster and Ermentrout were able to reproduce the shapes and patterns of almost every known sea mollusk.

The basic concept behind the neural net model, which was first described by physicist Ernst Mach in 1865 to explain visual illusions, is that centers of excitation – in the retina, for example – are surrounded by areas of inhibition. Local activation/lateral inhibition applies to many types of neuronal activity and underlies the extreme sensitivity of our eyes and visual system to edges – the activation of cells at an edge inhibits neighboring cells, accentuating the discontinuity.

Famed computer scientist Alan Turing showed in 1952 how local activation/lateral inhibition could work chemically, and biologist Hans Meinhardt used this chemical model to create realistic seashell patterns in the 1970s, which he published in a 1995 book called "The algorithmic beauty of sea shells."

At that time, the neural basis of shell patterning hadn't been widely accepted, though Oster and Ermentrout published an earlier version of the neural model in the 1970s. One problem with Meinhardt's chemical model, which hypothesized reactions among chemicals diffusing through the snail shell, is that it required different chemical reactions to produce each shell pattern.

"Our real contribution is not reproducing the patterns, but showing that the nervous system can do it with one equation based on the principle discovered by Ernst Mach in the 1860s," Oster said.

Striped shells are the easiest to explain with this neural network model. A pigment-secreting cell inhibits secretion of pigment by neighboring cells but not itself, so that the same pattern is repeated day after day, yielding a stripe. Similarly, if one cell pumps up calcium carbonate secretion while depressing secretion by surrounding cells, ridges result. Interestingly, the stripes or ridges split naturally as the shell grows, a mathematical necessity because the size of the inhibition area remains the same as the shell's edge grows.

Bands parallel to the growing edge can be explained by inhibition of future activity. Pigment secreted on one day can inhibit secreting cells for a few days, resulting in an on/off pattern that produces a series of bands.

The most interesting patterns, however, are waves of activity that interfere to produce zigzags, diamonds, chevrons, arrowheads and a host of other shapes. These come about when a pigment inhibits future secretion at that site but excites secretion in surrounding cells. The pigment thus moves laterally on successive days, producing the equivalent of a traveling wave.

Ironically, most sea snails don't care a whit about their shell pattern. They are buried in the mud of the seafloor where their patterns are hidden even from potential mates.

"The pigment is a cue to get the mantle in register so it builds the right shaped shell, and is only an epiphenomenon reflecting neural activity," Oster said. "It is incidental to the snail."

"There is no strong selective pressure to drive patterns, so evolution can explore the entire parameter space" of possible shells, Boettiger added. "That was one rewarding thing about this work; it brought some nice aesthetics to the whole project."

With their success describing shell patterning, Oster plans to move on to his real interest, how cuttlefish rapidly change their patterns in response to the environment. Cuttlefish see a pattern in the environment and alter their skin pattern to blend in, he said, often flickering so rapidly that they resemble an hypnotic strobe.

The work was supported by the National Science Foundation. 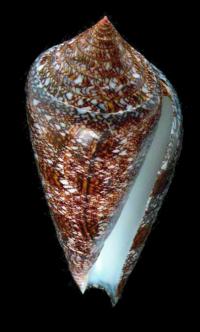 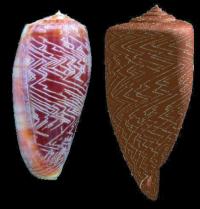