Identifying a reliable biomarker to predict the onset of autoimmunity in type 1 diabetes (T1D) has eluded scientists. As a result, T1D is typically diagnosed long after the majority of insulin-producing cells have been irreversibly destroyed. Unlike the onset of other autoimmune diseases which can be seen on the body or felt through symptoms, the attack on the islets cannot be observed because they reside deep within the pancreas.

Now scientists from the Diabetes Research Institute at the University of Miami Miller School of Medicine have shown that islets transplanted in the anterior chamber of the eye (ACE) may be reliable reporters of type 1 diabetes development and progression elsewhere in the body. In a study conducted in a rodent model of type 1 diabetes, the researchers showed that ACE-transplanted islets exhibit early signs of inflammation well before the manifestation of diabetes symptoms. If scientists could detect the start of islet destruction early enough, it could allow for timely interventions to halt or delay the further loss of the islet cells at the inception of the disease or before recurrence of autoimmunity after islet transplantation. The results are published online in Diabetologia, the journal of the European Association for the Study of Diabetes (EASD).

Using a previously established approach that they pioneered, study co-authors Midhat Abdulreda, Ph.D., DRI assistant professor of surgery, and Per-Olof Berggren, Ph.D., Mary Lou Held Visiting Scientist and adjunct professor of surgery at the DRI, and director of the Rolf Luft Research Center for Diabetes and Endocrinology at the Karolinska Institutet in Stockholm, Sweden, and their team studied in real time transplanted islets within the ACE of mice before, during and after type 1 diabetes development. The team found that during diabetes onset, islet grafts in the eye were attacked by the immune system in a similar way to islets transplanted in the kidney as well as to native islets of the pancreas. Additionally, the infiltration of the immune cells in all three locations coincided with the hallmarks of autoimmunity, namely early islet inflammation and the later onset of hyperglycemia.

Guided by the early signals from reporter islets, the team tested two approaches for halting the attack against the insulin-producing cells. First, they administered short-term systemic treatment with anti-CD3 monoclonal antibody, an immunosuppressive agent that prevents rejection, which significantly delayed the progression of type 1 diabetes compared to controls.

Next, they explored localized immunosuppression within the eye in which the islets were transplanted, a potentially safer alternative to systemic treatment, which also significantly prolonged the survival of the cells.

"The current research highlights the potential of ACE-islets in guiding and improving the development of new treatment modalities in type 1 diabetes prevention, as well as in transplant applications, with the goal of eliminating systemic immunosuppression," said Dr. Abdulreda.

"Our findings demonstrate the value of islet transplants in the eye to study early type 1 diabetes pathogenesis in vivo and underscore the need for timely intervention to halt disease progression," said Dr. Berggren.

In type 1 diabetes, the insulin-producing islets cells of the pancreas have been mistakenly destroyed by the immune system, requiring patients to manage their blood sugar levels through a daily regimen of insulin therapy. Islet transplantation has restored natural insulin production in people with T1D, as DRI scientists have published. However, patients who receive islet transplants require life-long immunosuppression to prevent rejection of the donor cells. Not only does extended use of anti-rejection drugs pose serious side effects, but the immune attack against the transplanted islets can still occur despite the use of these agents. DRI scientists have been investigating ways to reduce or eliminate the need for anti-rejection therapy, one of the major research challenges which stands in the way of a biological cure for T1D. 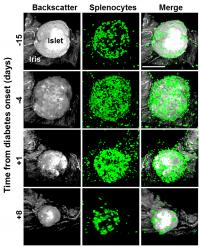