Acute Respiratory Distress Syndrome (ARDS) affects hundreds of thousands of people each year, many of them children. Those with this life threatening condition have severely injured and wet lungs, and are treated with mechanical ventilation. Now, a study led by Professor Kanwaljeet Anand published in Frontiers in Pediatrics, investigates the effects of a new steroid treatment on children suffering from ARDS.

"Over the last 20-30 years researchers have come up with novel therapies but have not been able to move the needle substantially in terms of reducing mortality of ARDS patients," explains Professor Anand of Stanford University, USA. "In this work, we conducted the first-ever randomized control trial and saw clinical differences in children treated with steroids."

ARDS is a catch-all term associated with the inability of lung tissue to take up oxygen, the lungs become very stiff and are incapable of transferring oxygen into the blood. ARDS can occur following direct injury of the lungs, such as pneumonia, bronchiolitis, following inhalation of toxic gas and near drowning. It can also develop in patients with severe systemic illnesses. Understanding why ARDS occurs and the differences between mechanisms is key to being able to treat ARDS effectively.

In this pilot study, children diagnosed with ARDS in intensive care units requiring mechanical ventilation, were treated with the corticosteroid, methylprednisolone. The treatment showed suppressed inflammation, "although the trial did not improve mortality or the duration that mechanical ventilation was required, the children's ventilation and blood oxygenation improved," explains co-worker Dr. Dai Kimura. Anand adds that "this is a very significant outcome as, even with a small pilot study, we were able to demonstrate significant differences in those treated with steroids."

To develop an effective steroid treatment for ARDS, the team needed more information how steroids affect lung inflammation. They isolated five biomarkers that are at abnormal levels in ARDS sufferers. These are associated with the blood clotting system, white blood cell activation, and injury of cells lining the lung and blood vessels.

"The study found that there are important differences in biomarker levels in the children that received the steroids, compared with those who did not," says Kimura. In developing this framework for biomarker identification, the team has made the first major steps towards being able to understand the causes of ARDS and develop targeted treatment.

In the next phase of research, they will study larger groups of children and identify how the biomarkers are affected when the source of lung trauma is different. They will also be able to look for more correlations, for example in children of similar age or the same sex. Anand notes that "our studies have already found that steroids reduce the activation of neutrophils (white blood cells) and this reduces the amount of MMP-8 biomarker in the blood, so if a patent has high levels of this biomarker, we can assume they will be more responsive to steroid therapy."

Although still in the early stages of research, these preliminary results indicate that steroid treatment may have potential for improving the outcomes of children suffering from ARDS. The team has also laid the foundations for understanding of the underlying causes of ARDS. They will continue to investigate the biomarkers present in sufferers to identify children who will most likely benefit from steroid treatment.

Read the full study in Frontiers in Pediatrics.

New treatment for children with ARDS 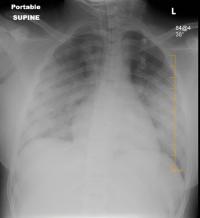