Hydride transfer is a prevailing protocol for reduction of unsaturated compounds, which is traditionally accomplished under the catalysis of transition-metals, particularly those of noble metals. Because of concerns associated with their low abundance, high toxicity and harmful transition-metal residues, considerable research has recently focused on the use of main-group organic counterparts as surrogates for conventional metal hydrides.

Recently, N-heterocyclic phosphines (NHPs) have emerged as a new group of promising catalysts for metal-free reductions. Their excellent hydricity of the P-H bond, which rivals or even exceeds those of many metal-based hydrides, is the result of hyperconjugative interactions between the lone-pair electrons on N atoms and the adjacent sigma*(P-H) orbital, as reflected by the resonance structures of the diazaphospholene skeleton. The umpolung reactivities of phosphines derived in this way stimulated researchers to identify innovative structures with comparable or enhanced hydricities. Significant developments in the past decade have made P-H hydrides an attractive research area in main-group hydrides. Many NHPs (Scheme 1) with diverse structures and reactivities have been developed and used as powerful stoichiometric or catalytic reductants in organic syntheses, such as catalytic reduction of polar unsaturated bonds and the hydroboration of pyridines.

Several exhaustive reviews have previously discussed carbon- and borane-based hydrides in terms of their hydridic reactivities and applications in chemical transformations. However, there have been few summaries of up-to-date synthetic applications of N-heterocyclic phosphines, particularly with regard to recent progress in asymmetric chemistry. This review from Jin-Dong Yang and Jin-Pei Cheng's group summarized recent progress in studies of the reactivity and synthetic applications of these phosphorus-based hydrides, with the aim of providing practical information to enable exploitation of their synthetically useful chemistry.

The authors outlined significant advances in this area. In the first section, they described experimental methods for quantifying the thermodynamic and kinetic hydricities of NHPs, along with a brief introduction to the NHP catalytic mechanism. The synthetic uses of NHPs as hydridic catalysts, categorized by the identity of the terminal reductants, were summarized (Scheme 2). Where applicable, the use of measured reactivity parameters to rationalize these catalytic reductions was attempted.

Moreover, the reactions developed in the past mainly focused on the hydridic reduction ability of NHPs. On the basis of recent findings that NHPs can also serve as good hydrogen-atom donors and their corresponding phosphinyl radicals are excellent electron donors. Hence, a brief introduction to recent progress in radical reactions of NHPs was also provided. This alternative pathway might provide a potential route to previously inaccessible reactivity in hydridic reduction. Finally, the authors discussed promising future applications of P-H hydrides in various fields. 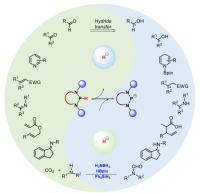