By charting the differing fates of individual T cells, researchers have shown that previously unpredictable aspects of the adaptive immune response can be effectively modeled. The crucial question: What determines which of the immune system's millions of cells will mobilize to fight an acute infection and which will be held back to survive long-term, forming the basis of the immunological memory? The scientists' findings, published in the journal Science, could have implications for improved immunotherapy and vaccination strategies.

The scientists found that the immediate immune response to an infection or tumor is mounted by a relatively tiny fraction of the so-called CD8+ T cells that are capable of recognizing the associated antigen. These few rapidly expand into giant populations of short-lived T cells targeted at killing infected cells or cancer cells. Meanwhile the vast majority remain in smaller populations geared toward longevity, to help ensure that the immune system will remember the antigen when it appears again in the future.

"Up to now, it was only possible to observe groups of immune cells during the response to an infection," says Prof. Dirk Busch of the Technische Universitaet Muenchen (TUM). "We have developed technology that enables us to observe individual T cells." Together with innovative cell processing technology, the researchers brought theoretical systems biology and clinical expertise to bear on this investigation, a collaboration of TUM, the University of Heidelberg, the Helmholtz Center Munich, the German Cancer Research Center (DKFZ), and the National Center for Infection Research (DZIF).

Marking the threshold of predictability

A single T cell is theoretically capable of generating an adaptive immune response by developing into diverse and expanding populations, fighting the acute infection as well as providing lasting memory for the future. But a fundamental question – whether an effective response is predetermined on the level of an individual T cell or emerges from the commingled fates of multiple cells – had never been put to the test. Another unresolved question concerned the order in which populations of short-lived killer cells and long-lived memory cells develop.

To address these questions, researchers at TUM began by introducing specially marked T cells into mice and then triggering a specific immune reaction. Around seven days later, they were able to determine how many descendant cells, and what kinds, had been generated by individual T cells. Biomathematical modeling, using an approach co-developed with the group of Prof. Thomas Hoefer at Heidelberg, helped to explain what the data showed. "One can't predict which 'career paths' the descendants of an individual killer T cell will take, " says first author Veit Buchholz, a medical resident at TUM. "This is a matter of chance, like a single roll of the dice. To generate a predictable immune response, we have found that a sample of at least 50 individual cells is needed."

From analysis of many of the huge populations of short-lived killer cells and the relatively tiny populations of long-lived memory cells, the researchers were able to reconstruct the T cells' development program and predict their behavior: All of the cells proceed along the same path of development, but they don't go the same distance. That is, the few cells that generate giant populations of short-lived infection fighters have gone through the same stage as those fated to produce memory cells – but they have left that stage behind to provide immediate protection.

Beyond the results themselves, another important outcome of this study is increased confidence in the combined power of the in vivo and in silico approaches. "The fact that the experimental results confirmed our predictions in detail has strongly supported our theory," says Prof. Hoefer, leader of the Heidelberg group.

There are several ways these findings could become important in the setting of human health, the researchers explain – in improving the effectiveness of immunotherapy against cancer, for example, or in optimizing treatment for older people, who tend to have significantly fewer copies of a given type of immune cell. "The future memory cell stands at the beginning of an expansion process with two extreme forms of differentiation," Buchholz says, "and ideally there should be a balance, so that the memory pool is not depleted. So we can think about how to tweak vaccination schemes to first allow expansion and not let differentiation kick in too early."

This research was supported by the German Research Foundation (DFG) through SFB TR36 (TP-B10/13, TP-Z1), SFB 1054 (TP-B09), and SFB 914 (TP-B04); the Federal Ministry of Education and Research (BMBF) ForSysPartner (no. 0315267E); the TUM Institute for Advanced Study; the European Research Council through EU-FP7 SYBILLA (no. 201106); the Initiative and Networking Fund of the Helmholtz Association within the Helmholtz Alliance on Immunotherapy of Cancer; and the National Science Foundation under grant no. NSF PHY11-25915.

Technische Universitaet Muenchen (TUM) is one of Europe's leading universities. It has roughly 500 professors, 9,000 academic and non-academic staff, and 32,000 students. It focuses on the engineering sciences, natural sciences, life sciences, medicine, and economic sciences. After winning numerous awards, it was selected as an "Excellence University" in 2006 and 2012 by the Science Council (Wissenschaftsrat) and the German Research Foundation (DFG). In both international and national rankings, TUM is rated as one of Germany's top universities and is dedicated to the ideal of a top-level research-oriented entrepreneurial university. The university's global presence includes offices in Beijing (China), Brussels (Belgium), Cairo (Egypt), Mumbai (India) and São Paulo (Brazil). The German Institute of Science and Technology (GIST - TUM Asia), founded in 2002 in Singapore, is the first research campus of a German university abroad.

Insights into the immune system, from the fates of individual T cells

How to Find the Offspring of a Single T Cell 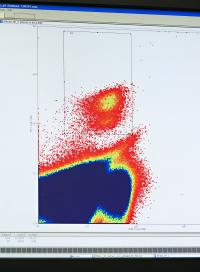 Visualizing an Immune Response Derived from a Single T Cell