AMES, Iowa -- Sharing food has widely been considered by scholars as a defining characteristic of human behavior. But a new study by Iowa State University anthropology professor Jill Pruetz now reports that chimpanzees from her Fongoli research site in Senegal also frequently share food and hunting tools with other chimps.

Co-authored by ISU anthropology graduate student Stacy Lindshield, their study is posted online in Primates and will be published in a future issue of the journal.

The researchers witnessed 41 cases of Fongoli chimpanzees willingly transferring either wild plant foods or hunting tools to other chimpanzees. While previous research by primatologists had documented chimps transferring meat among other non-relatives, this is the first study to document non-meat sharing behavior.

"They're [the Fongoli chimps] not the only chimps that share, but in terms of the resources that we cover here, that is unique," said Pruetz, who was named a 2008 National Geographic Emerging Explorer for her world-renowned research on savanna chimpanzees in Senegal. "I guess all chimps share meat, but they don't share plants or tools. Yet they do here, in addition to meat. It was intriguing when we first started seeing these events."

The researchers document a frequency of sharing previously unreported for chimpanzees. The chimps commonly transferred meat and wild plant foods, but they also transferred tools, honey and soil. Most of the transfer behavior was classified as recovery or passive sharing, with females commonly taking food from males -- with much of that taking place from dominant to subordinate recipients.

Of the 41 witnessed events, Fongoli male chimps transferred wild foods or tools to females 27 times. While Christina Gomes and Christopher Boesch from the Max Planck Institute for Evolutionary Anthropology authored a 2009 study proposing that males and females exchange meat for sex -- resulting in males increasing their mating success and females increasing their caloric intake to overcome the energy costs and potential injury from hunting -- Pruetz contends that's not all that's going on in the cases she's witnessed.

"It's a different set of relationships within the social group [at the Fongoli site], and I tend to think again that it ties back to the environment and the fact that the resources are distributed differently," said Pruetz, who is also ISU's Walvoord Professor in the College of Liberal Arts and Sciences. "They have a big home range -- about 10 times bigger than Jane Goodall's range in Gombe at 86 square kilometers -- and that forces them to stay together. If they split up like chimps normally do, it could be days or weeks or months before they may see someone again -- and chimps are more social than that. So I think they stay together like monkeys and they move around their home range together."

Pruetz sees some of the sharing behavior between males and females as a product of the "food for sex" theory. The ISU researchers found that both adult females in estrus [the period of maximum sexual receptivity of the female] and adolescent females cycling to estrus were more likely to receive food from adult male chimps. Pruetz says that the male chimps may use food transfer as a future mating strategy with the adolescent females, particularly since there are a relatively small number of females in the Fongoli community.

"It may be used as a strategy [by the male chimps], anticipating a long-term gain on their behavior," she said. "We see that in baboons who have special friends."

As the only habituated community of chimpanzees living in a savanna environment, the researchers conclude that Fongoli provides detailed information on the effect of an open, dry and hot environment on social behavior and organization. Pruetz theorizes that it may also shed some light on how the earliest humans first came to share.

"There are aspects of human behavior, and I think that's interesting because it's not exactly the same, but it may give you an idea of how it [sharing among early humans] started," Pruetz said. "It's at least one scenario and how it could have come about in our own lineage. To me, it just reinforces how important environment was."

The research was funded, in part, by the Wenner-Gren Foundation for Anthropological Research and the National Geographic Society. 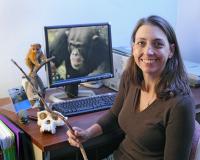