This release is also availabe in French.

Lilongwe, Malawi (13 December 2007)—Launching an intensive effort to revive small-scale farming and agricultural markets hobbled by the scarcity and high costs of basic farm supplies such as seed, tools and fertilizer, the Alliance for a Green Revolution in Africa (AGRA) has awarded US$13 million in grants to establish nationwide networks of rural agro-dealers in Malawi, Tanzania and Kenya.

“All three country programs aim to achieve a 30 percent growth in rural smallholder incomes; a 40 to 50 percent reduction in the average distance farmers need to travel to purchase farm supplies; and an up to 15 percent decrease in the price of inputs within three years,” said A. Namanga Ngongi, the new president of AGRA.

The agro-dealers will operate small businesses that reach poor farmers in remote areas. In addition to selling affordable farm supplies in the quantities needed by small-scale farmers, the agro-dealers will be trained in the safe handling, efficient and environmentally sound use of farm inputs, and will pass this knowledge on to farmers.

These agro-dealer networks will give poor farmers access to basic farm supplies that are otherwise beyond their reach. Now, it is common for rural farmers to travel great distances just for the opportunity to purchase seeds or fertilizers. And at the end of their journey they frequently find stores lack the specific items they need or are selling them at unaffordable prices. Lack of access to basic farm supplies has made it virtually impossible for small-scale farmers to increase their yield or incomes, reinforcing widespread poverty.

The AGRA Agro-dealer Development Program (ADP) will provide emerging, small retailers in rural communities—many of who farm themselves—with the training, capital and credit they need to become certified agro-dealers. These agro-dealers will in turn reach a total of 1.6 million rural households, potentially benefiting 8.8 million farmers and their family members.

The US$4.3 million Malawi initiative, led by the Rural Market Development Trust (RUMARK) is focused on developing a network of over 600 rural agro-dealers, up from the existing core of 160.

The US$4.3 million Tanzania Agro-dealer Strengthening Program (TASP) will build a network of 840 agro-dealers. The Tanzania program aims to transform what is now a fragmented farm supply distribution system into a more tightly linked consortium of businesses. The program will emphasize gender-equal participation and ensure that women have full access to training and financing. It also will focus on giving farmers greater access to Tanzania’s government-run fertilizer supply program.

Kenya’s Agro-dealer Strengthening Program (KASP) will use its US$4.4 million grant to scale-up an existing network of 243 agro-dealers, who are concentrated in Western Kenya, to include 1,800 rural farm supply businesses in 32 districts across the country. It will also work with 10 “Millennium Villages”, part of the Millennium Villages Project of the Earth Institute at Columbia University, to increase the economic sustainability of their farm input subsidy program.

“The agro-dealer programs build on great initial success in Malawi, which has seen the country transform itself from being a net importer to a net exporter of maize, and even to become a donor of food aid to neighboring countries. If Malawi can do it, it can be done by every country in Africa,” said Akin Adesina, Vice President for Policy and Partnerships at AGRA.

Malawi faced a major food crisis just a few years ago due to drought that left millions of people starving. In response, the Malawi government began distributing subsidized fertilizers and improved seed to assist poor farmers. In tandem with this effort, RUMARK began training and certifying agro-dealers who could set up shop in remote regions, giving farmers access to the farm supplies.

In 2006/2007, Malawi provided farmers with some $60 million in so-called “smart” or “targeted” subsidies. Based on this system, farmers can trade in government-issued vouchers to certified agro-dealers in exchange for partially subsidized farm supplies.

“The system made sound economic sense by combining public sector support for poor farmers with an exchange system that strengthens the private sector,” said Adesina. “This was in sharp contrast with previous approaches that delivered subsidized supplies solely through government agencies, displacing the role of the private sector.”

"The results of all of these efforts—plus favorable rains and Malawi Government policies—have been stupendous," said Richard Chapweteka, director of RUMARK. "In 2006/07, the country generated an additional maize surplus of 1.4 million metric tons. It sold $160 million worth of maize and donated 10,000 metric tons of food aid to neighboring Lesotho and Swaziland."

In addition, the program showed that, with modest levels of support, grassroots agricultural entrepreneurship can thrive in rural Africa.

“It was important for me to get training in business management and the types of seeds and fertilizers to sell,” said Dinnah Kapiza, who transformed her used clothing business into a full-line farming supply store in rural Malawi that now serves 600 small-scale farmers. “I also developed relationships with government extension agents because farmers want more than seeds or fertilizer. They want advice on the best crops to plant and the farming techniques that will produce a good harvest.”

However, even in Malawi, much work remains to be done to expand farmers’ access to supplies and to cash markets on a larger scale, and to improve access to finance and credit. To this end, the Agro-dealer Development Programs in all three countries will implement a variety of innovative financing tools.

To increase the flow of credit to rural areas, and get farmers and agro-dealers start-up capital, the programs will support a range of innovative financing tools. These include “guarantee facilities” that share risks 50-50 with agricultural firms that supply farm inputs to the agro-dealers in rural areas. In Malawi, guarantee facilities have shown strong initial success. Over the last five years, since the program was first initiated with funding from the Rockefeller Foundation, each dollar of credit guarantee has generated 16 dollars worth of farm supply sales in rural areas, with the loan default rate of certified agro-dealers at less than 1.5 percent.

“That’s remarkable. Now, the government, donors and commercial banks should scale up lending to these agro-dealers at national scale,” Adesina said.

The programs will also utilize matching grants for activities such as storage and sorting of products and small-scale food processing. Other efforts will link agro-dealers to supply companies, especially local seed companies that are distributing varieties responsive the needs of local farmers.

Programs in each country are linked to a wide number of partners, from trade associations to agricultural research organizations and financial institutions. The nonprofit Citizens Network for Foreign Affairs will coordinate the projects in the three countries.

“AGRA will work with governments to take things to scale. The remarkable growth in food production experienced in Malawi can be replicated elsewhere,” Ngongi said. “Success will depend on consistent support that over a period of years allows farmers to generate streams of consistent surpluses. Only then will broad-based and deepened rural economic growth be self-perpetuating.”

About the Alliance for a Green Revolution in Africa (AGRA)

AGRA is a dynamic partnership working across the African continent to help millions of small-scale farmers and their families lift themselves out of poverty and hunger. AGRA programs develop practical solutions to significantly boost farm productivity and incomes for the poor while safeguarding the environment. AGRA advocates for policies that support its work across all key aspects of the African agricultural “value chain”—from seeds, soil health, and water to markets and agricultural education.

AGRA’s Board is chaired by Kofi A. Annan, the former Secretary-General of the United Nations. With initial support from the Rockefeller Foundation and the Bill & Melinda Gates Foundation, AGRA maintains offices in Nairobi, Kenya and Accra, Ghana. For more information, go to www.agra-alliance.org .

Funder
Alliance for a Green Revolution in Africa 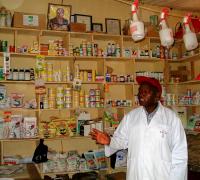 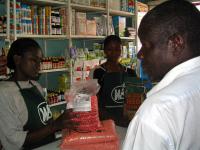