Some pristine meteorites contain a record of the original building blocks of the solar system, including grains that formed in ancient stars that died before the sun formed. One of the biggest challenges in studying these presolar grains is to determine the type of star each grain came from.

Nan Liu, research assistant professor of physics in Arts & Sciences at Washington University in St. Louis, is first author of a new study in Astrophysical Journal Letters that analyzes a diverse set of presolar grains with the goal of realizing their true stellar origins.

Liu and her team used a state-of-the-art mass spectrometer called NanoSIMS to measure isotopes of a suite of elements including the N and Mg-Al isotopes in presolar silicon carbide (SiC) grains. By refining their analytical protocols and also utilizing a new-generation plasma ion source, the scientists were able to visualize their samples with better spatial resolution than could be accomplished by previous studies.

“Presolar grains have been embedded in meteorites for 4.6 billion years and are sometimes coated with solar materials on the surface,” Liu said. “Thanks to the improved spatial resolution, our team was able to see Al contamination attached on the surface of a grain and to obtain true stellar signatures by including signals only from the core of the grain during the data reduction.”

The scientists sputtered the grains using an ion beam for extended periods of time to expose clean, interior grain surfaces for their isotopic analyses. The researchers found that the N isotope ratios of the same grain greatly increased after the grain was exposed to extended ion sputtering.

Isotope ratios can be rarely measured for stars, but C and N isotopes are two exceptions. The new C and N isotope data for the presolar grains reported in this study directly link the grains to different types of carbon stars based on these stars’ observed isotopic ratios.

“The new isotopic data obtained in this study are exciting for stellar physicists and nuclear astrophysicists like me,” said Maurizio Busso, a co-author of the study who is based at the University of Perugia, in Italy. “Indeed, the ‘strange’ N isotopic ratios of presolar SiC grains have been in the last two decades a remarkable source of concern. The new data explain the difference between what was originally present in the presolar stardust grains and what was attached later, thus solving a long-standing puzzle in the community.”

The study also includes a significant exploration of radioactive isotope aluminum-26 (26Al), an important heat source during the evolution of young planetary bodies in the early solar system and also other extra-solar systems. The scientists inferred the initial presence of large amounts of 26Al in all measured grains, as predicted by current models. The study determined how much 26Al was produced by the “parent stars” of the grains they measured. Liu and her collaborators concluded that stellar model predictions for 26Al are too high by at least a factor of two, compared to the grain data.

The data-model offsets likely point to uncertainties in relevant nuclear reaction rates, Liu noted, and will motivate nuclear physicists to pursue better measurements of these reaction rates in the future.

The team’s results link some of the presolar grains in this collection to poorly known carbon stars with peculiar chemical compositions.

The grains’ isotopic data point to H-burning processes occurring in such carbon stars at higher-than-expected temperatures. This information will help astrophysicists to construct stellar models to better understand the evolution of these stellar objects.

“As we learn more about the sources for dust, we can gain additional knowledge about the history of the universe and how various stellar objects within it evolve,” Liu said. 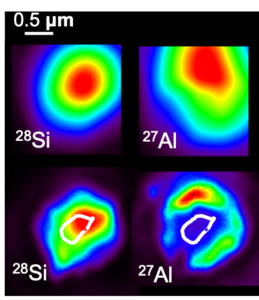 NanoSIMS images of a SiC grain