A research group including Professor INAGAKI Shigenori (Graduate School of Human Development and Environment, Kobe University), Professor KUSUNOKI Fusako (Tama Art University) and Professor MIZOGUCHI Hiroshi (Tokyo University of Science) have developed an interactive system which encourages children to use their imagination while playing. The system encourages children to move around by projecting animated footprints of different animals on to a digitally augmented floor that react to the children’s movements. An evaluation experiment was carried out at Kobe University Elementary School, which revealed the effects of the different types of interaction offered by the system.

These research results were given advanced publication in the online version of the ‘International Journal of Child-Computer Interaction’ on September 10, 2021.

Play during infancy and early childhood develops children’s communication skills and emotional expression. For this reason, offering attractive play opportunities to children is an important social issue. To address this, an interactive system using floor projections that respond to the player’s movements was developed to provide children with appealing games.

Aim: This research aimed to create a system to offer highly appealing play to children. Focusing on how children interacted with the system, the researchers investigated the different effects that realistic interactions and unrealistic interactions had on children’s imagination and engagement.

Evaluation method: The system was evaluated using a questionnaire and an eyetracker. The questionnaire consisted of a total of 20 questions related to the following categories: interest, imagination, attachment and immersion. For the answer to each question, participants could pick from a scale of 7 options (Likert scale). The participants filled out the questionnaires after taking part in each experiment (realistic or unrealistic interactions) (Figure 2). In addition, an eyetracker was used to measure the direction of each child’s gaze as they tried interacting with the footprints (Figure 3).

Results and conclusions: Differences were found in the answers relating to the two types of interaction for each item on the questionnaire. These results indicate that unrealistic interactions have a tendency to stimulate children’s imaginations more than realistic interactions. The same correlation was also observed in the eye tracking results.

The group is currently conducting research to combine multiple systems so that more children can play at the same time. They are aiming to better promote the social growth of children by implementing engaging systems that encourage children to play.

This research was supported by a KAKENHI grant from the Japan Society for the Promotion of Science (grant no. JP18H03660). The researchers would like to express their gratitude to Kobe University Elementary School (Hyogo, Japan) for their collaboration in the evaluation experiment. 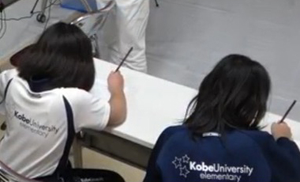 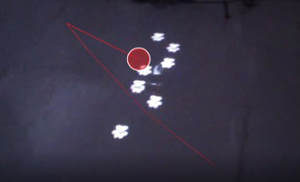