A collaborative research team from Kumamoto University (Japan), the Japanese Red Cross Society and Lund University (Sweden), has established a new cell line from human adult bone marrow that can grow infinitely and differentiate toward red blood cells (RBCs). This cell line has the potential to contribute to future transfusion therapies.

Transfusion is an essential clinical treatment for treating dozens, if not hundreds, of maladies and medical procedures ranging from anemia to surgical operations. Currently, the transfusion system relies heavily on blood donated from volunteers. However, the number of donors is inadequate and has been decreasing yearly even though the requirements for transfusions constantly remains high. In particular, less common blood types are always at a risk of shortage. Furthermore, contamination of donated blood (by viral infection or other factors) further reduces availability.

To solve these burdens, producing RBCs outside of the body has been considered an alternative to increase the blood supply available for transfusion. Industrially produced RBCs are clean, and their production can be controlled to stably provide desired blood types. It is important to note that RBCs are the most abundant type of cell (>80% of all cells) in the body. Thus, sources that are able to continuously provide enormous amounts of RBCs are required. Immortalized cell lines that can limitlessly proliferate and generate RBCs are therefore expected to become significant alternatives to compensate a serious blood supply shortage for therapies that require transfusion.

It is here where the research team headed by Prof. Miharada from Kumamoto University succeeded in establishing a new RBC generating cell line. Their creation, which they named Erythroid Line from Lund University (ELLU), was developed from isolated human bone marrow cells (CD34+ hematopoietic stem and progenitor cells) and can grow infinitely and differentiate into RBCs. The researchers previously established cell lines using erythroid cells differentiated from human umbilical cord blood CD34+ cells and human induced pluripotent stem (iPS) cells, both of which contain fetal (γ) globin. However, cells having adult (β) globin are more desired for use in transfusion therapies.

Previously, human papilloma virus (HPV) E6/E7 genes are frequently used to immortalize cells. It has been believed that turning-off the HPV-E6/E7 is essential when the cells begin differentiation to RBCs. However, Prof. Miharada’s team demonstrated that ELLU cells can differentiate without such a complicated system. Interestingly, ELLU cells showed considerable variation in their hemoglobin expression, with some clones expressing adult globin adult (β) globin while others mainly containing fetal (γ) globin, despite the fact that all of the cells were derived from adult bone marrow. They also unexpectedly found that clones expressing adult type hemoglobin started dying upon differentiation. In contrast however, clones with fetal hemoglobin gradually started expressing adult globin and generated more stable cells.

“We believe that our findings will contribute to simplifying the methods used to establish immortalized cell lines, and allow us to select clones that have the maximum potential for producing RBCs,” Prof. Miharada stated.

There is no conflict of interest. 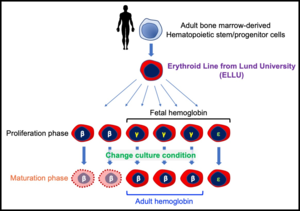 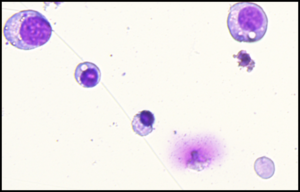 Differentiation of an Erythroid Line from Lund University (ELLU) clone