During animal development, specific genes become active in different cells at exact times in order to produce all the tissues and structures of the body. This exquisite genetic choreography is made possible by multiple layers of organization built into organisms’ DNA.

Now, new research from the laboratory of Princeton scientist Michael Levine, published February 4, 2022, in the journal Science, has identified how two classes of regulatory sequences work together to ensure the proper timing of gene expression in the fly embryo. One class of elements brings together distant regions of the genome, and the other ensures the specificity of interactions.

If the nucleus of a human cell were the size of a basketball, the DNA contained within it would be a string about 44 miles long. Nature solves this problem by winding DNA around proteins called histones and packing the assembly tightly together. When visualized under a microscope, nuclear DNA resembles nothing so much as a hopelessly knotted ball of string. And yet, from this tangle emerge the myriad cell types and tissues of the adult organism. By looking more closely, scientists have discovered that nuclear DNA is not a messy knot but a highly organized structure whose compartmentalization can actually determine gene expression activity.

“How the folding of the genome inside each of our cells controls gene expression has emerged as a central but controversial question in biology,” said Philippe Batut, an associate research scholar who led the study under the supervision of Levine, Princeton’s Anthony B. Evnin '62 Professor in Genomics, Professor of Molecular Biology, and Director of the Lewis-Sigler Institute for Integrative Genomics.

At the lowest level of genome organization, genes that encode proteins lie in linear fashion along the DNA molecule. The expression of each gene is under the control of regulatory elements called enhancers, which can be located several tens of thousands of base pairs upstream or downstream of the gene itself. Studies have shown that to affect gene expression, these distant enhancers must come into physical proximity with the genes they control. Researchers believe that this happens via genome folding—that is, the formation of a loop within the intervening DNA. However, until now, it was unclear what features of the genome drive the formation of these loops, and how such interactions prevent enhancers from regulating the wrong genes.

“In this study, we investigated how genome folding controls the activity of the Hox genes—the master regulators of animal body plans. Working with Drosophila embryos, we used state-of-the-art genome engineering, mapping and live imaging to show that genome organization is critical for the proper timing and dynamics of gene activity during development,” Batut said.

Batut and co-author Xin Yang Bing, an associate research scholar in the Lewis-Sigler Institute for Integrative Genomics, used a technology called Micro-C to characterize and dissect how different stretches of DNA in the vicinity of Hox genes interact with each other during embryonic development. By introducing perturbations to the DNA in those interacting regions, the researchers could observe how such changes affect other interactions and how they influence development. Because the fly embryo is transparent and develops outside the mother’s body, the researchers were able to observe directly the spatial pattern and timing of expression for different Hox genes in embryonic tissues when interacting regions were altered.

“Through this work, we identified two classes of genome-organizing DNA elements with diametrically opposing functions: insulators and ‘tethering elements,'" Batut said. "We show that tethering elements help far-away enhancers find their target genes, to foster timely activation of gene expression. By contrast, insulators, which were discovered by Rebecca Kellum and Paul Schedl in the Princeton Department of Molecular Biology about 30 years ago, act as gatekeepers to prevent interference between regulatory elements found in neighboring genetic loci."

Insulators serve the opposite function: they partition the genome into independently regulated domains, by acting as a barrier to prevent physical interactions between enhancers and unrelated neighboring genes. For this reason, loss of individual insulators results in mis-regulation of gene expression due to inappropriate interactions. Tethers promote the correct interactions, while insulators prevent incorrect ones. Together, tethering elements and insulators represent a novel fundamental principle: that the temporal regulation of gene expression depends critically on the three-dimensional organization of DNA.

“The relationship between three-dimensional organization of the genome and transcriptional regulation is a hotly debated topic,” said Dr. Joanna Wysocka, professor of developmental biology at Stanford University, who was not involved in the research.  “The new study by Mike Levine and colleagues provides an important contribution to this discussion. An intriguing question for the future is whether a functionally distinct class of tethering elements exists in other species, including humans, and if so, what is the mechanism underlying its function.”

Identifying such mechanisms could prove key to unlocking an entirely new understanding of both genome organization and animal development.

Work described in this story was supported by grant number R35 GM118147 from the National Institutes of Health. 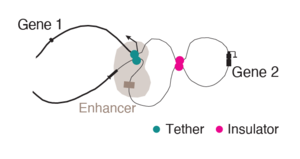 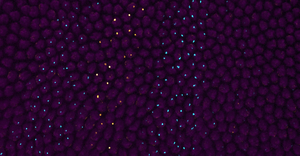