The research group of Associate Professor Uemura and Professor Tabuchi analyzed the function of neurexin in cerebellar granule cells using genetically modified mice. There are four types of neurotrophic factors, which are secretory proteins, including the brain-derived neurotrophic factor. The brain-derived neurotrophic factor released extracellularly is involved in the survival and differentiation of nerve cells and the regulation of synaptic function by binding to its high-affinity receptor TrkB. This is also thought to be associated with neuropsychiatric disorders such as depression and schizophrenia.

The group found that this mechanism plays an essential role in the survival of cerebellar granule cells, which are nerve cells existing in the cerebellar cortex. Parallel fibers, which are the axons of cerebellar granule cells, form excitatory synapses on the distal dendrites of cerebellar Purkinje cells. The results of this research are expected to be useful for elucidating the mechanism of neuronal circuit formation in the brain and for future research related to neurodevelopmental disorders such as autism. The results of this research were published in the online version of the journal Cell Reports on April 5, 2022 (Tuesday) at 11:00 am (Eastern Standard Time).

The synaptic connections between nerve cells are one of the key steps in the formation and development of the brain. Synaptogenesis is known to be induced by the binding of cell adhesion molecules called synapse organizers present at the axon terminals and dendrites. Neurexins are the major synaptic organizers present in nerve axons. So far, from the research of Associate Professor Uemura's group, in the cerebellum, neurexins on the axons (parallel fibers) of cerebellar granule cells form a complex with Cbln1-GluD2 to induce and maintain parallel fiber–Purkinje cell synapse. Although it was shown that synaptic formation was induced, the details of the physiological role of neurexins in cerebellar granule cells were not well understood.

In mammals, neurexin has three genes (neurexin 1, 2, 3). In order to clarify the role of neurexin in cerebellar-granule cells, the group generated a genetically modified mouse that simultaneously deletes all three genes of neurexin specifically for cerebellar granule cells using the recombinant Cre-loxP system. The Cre-loxP system is where the Cre recombinase is a bacteriophage-derived enzyme that recognizes a 34-base pair DNA sequence and causes DNA recombination between two loxPs. When a region of an arbitrary gene is sandwiched between two loxP sequences and Cre recombinase is allowed to act, the DNA sequence between loxPs is excised, causing gene deletion.

With this study, the research group of Associate Professor Uemura and Professor Tabuchi clarified the basic principle of brain neural network formation through the elucidation of the function of cell adhesion molecules between synapses. By clarifying the role of neurexin in cerebellar granule cells, the understanding of the basic principle has been further advanced. Neurexin has been reported to be associated with neurodevelopmental disorders such as autism, and the results of this study will be useful for elucidating the mechanism of neural circuit formation and future research related to neurodevelopmental disorders such as autism, Tourette’s, and schizophrenia. 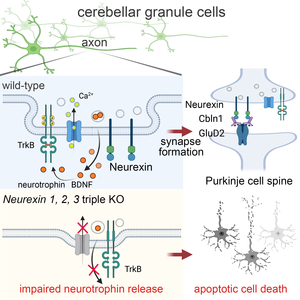