A research team led by scientists from the Hong Kong University of Science and Technology (HKUST) has revealed how secondary structure RNA elements control the cleavage activity of the DICER enzyme in both pre-miRNA and short-hairpin RNAs, improving the understanding of the DICER cleavage mechanism and providing a foundation for the design of accurate and efficient short-hairpin RNAs for gene-silencing.

In humans, microRNAs (miRNAs) govern multiple biological processes and play essential roles in various cellular functions.  These small RNAs regulate the level of messenger RNAs (mRNAs) used to make proteins.  The dysfunction in mRNA regulation caused by an anomaly in miRNA sequences or expressions is linked with various human diseases, including cancers and neurodegenerative and infectious diseases, making it a useful biomarker for disease diagnosis, prognosis, and drugs for treatments in the biomedical aspect.

The accuracy of miRNA sequences and expression is mainly determined by miRNA biogenesis, a process which involves DICER cleaving miRNA precursors (pre-miRNAs) to generate miRNAs.  Therefore, DICER cleavage controls miRNA expression and sequences, and thus its cleavage impacts miRNA functions.  In addition, the cleavage of DICER has been exploited in a widely-used shRNA (i.e., short-hairpin RNAs) gene silencing technology.  DICER plays a critical part in this technology by cleaving shRNAs into siRNAs, subsequently silencing targeted mRNAs.  shRNAs have been widely used in biological research and have also found their way into biomedical therapies.

In a paper published in Nature Communications on April 19, 2022, the research team, led by Prof. Tuan Anh NGUYEN, Assistant Professor in the Division of Life Science at HKUST, discovered the constructive role of a secondary RNA element called 22-bulge in the cleavage activity of DICER on shRNAs and human pre-miRNAs.

“Excitingly, among many secondary RNA elements we found in this study, we identified a single-nucleotide element, called 22-bulges, that exhibits the highest cleavage accuracy and efficiency of DICER on shRNAs and pre-miRNAs,” said Prof. Nguyen.  “Therefore, 22-bulges facilitate shRNAs' knock-down (KD) efficiency, allowing us to design a more effective shRNAs used in gene silencing technology.  In addition, 22-bulges are also found in many pre-miRNAs and are critical for proper miRNA production in human cells.”

“Our work allows us to understand the molecular mechanism of DICER cleavage and explain the functions of the secondary structure RNA elements in pre-miRNAs/shRNAs in controlling miRNA biogenesis and KD activity of shRNAs,” another co-first author and Prof. Nguyen’s student Trung Duc NGUYEN explained.  “In an application perspective, our findings provide an alternative approach to improve the current shRNA design for gene-silencing technology with higher KD efficiency and less off-target effect.” 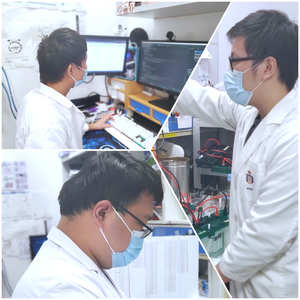