While the geographic ranges of many animals are expanding northward in response to climate change, those of North American and European bumblebee species are shrinking, a new study shows. These insects are failing to migrate northward, the study reveals, and in their southern territories, their ranges are compressing -- with range losses up to 300 kilometers in both North America and Europe. The findings reveal the vulnerability of these pollinators, which play key roles in agriculture, to a warming world, hinting that they may experience more rapid climate-related decline than other species. In response to changes in warmer temperatures, many animal species have shifted their geographical ranges northward. To investigate whether bumblebees' responses to climate change have followed suit, Jeremy Kerr and colleagues generated a database of geotagged observations of 67 European and North American bumblebee species from 1901 to 2010. They compared changes in individual bee species' northward movements in recent decades, against baseline bumblebee activity from 1901 to 1974, when the climate was cooler. To their surprise, bumblebees in recent, warmer decades didn't shift their ranges north. Simultaneously, their populations disappeared from the southernmost and hottest parts of their ranges. The researchers evaluated the roles of factors besides climate change, like land use and pesticide application, in causing range losses in the southern regions -- finding no significant correlation. Figuring out why bumblebees are not shifting their ranges northward like many other terrestrial animals will require further evaluation, the researchers say. Their results reveal the importance of studying vulnerability to climate change at both extremes of a species' geographic range.

Article #12: "Climate change impacts on bumblebees converge across continents," by J.T. Kerr at University of Ottawa in Ottawa, ON, Canada, and colleagues. For a complete list of authors, see the manuscript. 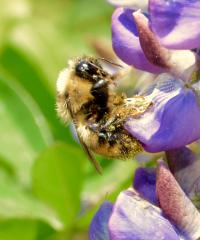