BUFFALO, N.Y. -- Helmets that do a better job of preventing concussions and other brain injuries. Earphones that protect people from damaging noises. Devices that convert "junk" energy from airport runway vibrations into usable power.

New research on the events that occur when tiny specks of matter called nanoparticles smash into each other could one day inform the development of such technologies.

Using supercomputers, scientists led by the University at Buffalo modeled what happens when two nanoparticles collide in a vacuum. The team ran simulations for nanoparticles with three different surface geometries: those that are largely circular (with smooth exteriors); those with crystal facets; and those that possess sharp edges.

"Our goal was to lay out the forces that control energy transport at the nanoscale," says study co-author Surajit Sen, PhD, professor of physics in UB's College of Arts and Sciences. "When you have a tiny particle that's 10, 20 or 50 atoms across, does it still behave the same way as larger particles, or grains? That's the guts of the question we asked."

"Our research is useful because it builds the foundation for designing materials that either transmit or absorb energy in desired ways," says first author Yoichi Takato, PhD. Takato, a physicist at AGC Asahi Glass and former postdoctoral scholar at the Okinawa Institute of Science and Technology in Japan, completed much of the study as a doctoral candidate in physics at UB. "For example, you could potentially make an ultrathin material that is energy absorbent. You could imagine that this would be practical for use in helmets and head gear that can help to prevent head and combat injuries."

The study was published on March 21 in Proceedings of the Royal Society A by Takato, Sen and Michael E. Benson, who completed his portion of the work as an undergraduate physics student at UB. The scientists ran their simulations at the Center for Computational Research, UB's academic supercomputing facility.

Additional multimedia not available through EurekAlert! can be found at http://www.buffalo.edu/news/releases/2018/04/008.html.

What happens when nanoparticles crash

The new research focused on small nanoparticles -- those with diameters of 5 to 15 nanometers. The scientists found that in collisions, particles of this size behave differently depending on their shape.

For example, nanoparticles with crystal facets transfer energy well when they crash into each other, making them an ideal component of materials designed to harvest energy. When it comes to energy transport, these particles adhere to scientific norms that govern macroscopic linear systems -- including chains of equal-sized masses with springs in between them -- that are visible to the naked eye.

In contrast, nanoparticles that are rounder in shape, with amorphous surfaces, adhere to nonlinear force laws. This, in turn, means they may be especially useful for shock mitigation. When two spherical nanoparticles collide, energy dissipates around the initial point of contact on each one instead of propagating all the way through both. The scientists report that at crash velocities of about 30 meters per second, atoms within each particle shift only near the initial point of contact.

Nanoparticles with sharp edges are less predictable: According to the new study, their behavior varies depending on sharpness of the edges when it comes to transporting energy.

Designing a new generation of materials

"From a very broad perspective, the kind of work we're doing has very exciting prospects," Sen says. "It gives engineers fundamental information about nanoparticles that they didn't have before. If you're designing a new type of nanoparticle, you can now think about doing it in a way that takes into account what happens when you have very small nanoparticles interacting with each other."

Though many scientists are working with nanotechnology, the way the tiniest of nanoparticles behave when they crash into each other is largely an open question, Takato says.

"When you're designing a material, what size do you want the nanoparticle to be? How will you lay out the particles within the material? How compact do you want it to be? Our study can inform these decisions," Takato says. 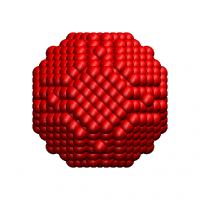 Nanoparticle with crystal facets during collision 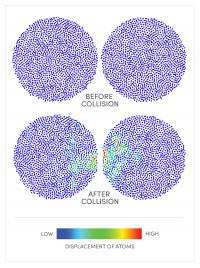