In high-performance CPUs used in large servers and power semiconductors used in inverters for hybrid electric vehicles (HEVs), as the integration density rises and the higher the power consumption becomes, the semiconductor package is also becoming smaller. Therefore, the power consumption per area of the semiconductor increases. As a result, the heat generation density increases, and the current situation is that the heat removal limit from the device is approaching.

In the research by Professor Yuki et al., they realized the structure hard for occurring the film boiling by engraving about 1 mm wide grooves at a regular interval on a heat conductor, such a copper, which contacts with a heating element, and combining it with a lotus metal. Lotus Thermal Solution has established a method that determines the appropriate groove cross-sectional areas and pore diameters according to the refrigerant, and developed a highly efficient boiling immersion cooler (1) using lotus metals (2). Silicon carbide (SiC), which is expected as a next-generation power semiconductor, has a heat generation density of 300 to 500 watts per square centimeter (W/cm2). Thus, to use SiC in devices, a cooler with a critical heat flux (CHF) (3) larger than this heat generation density is required. In this development, we succeeded in increasing CHF from about 200 W/cm2 of the conventional cooler to 530 W/cm2 or more by using the boiling promotion technology using lotus metals.

The boiling immersion cooler prototyped in this development has the capability to cool the inverter with Si semiconductors and SiC semiconductors and is expected as a technology to solve the heat concentration problem of in-vehicle power semiconductors with increasingly high heat generation density. Furthermore, this technology is considered as a highly efficient cooling technology for CPUs for conventional workstations and large-scale servers.

This is a method that a liquid refrigerant is boiled with the heat of a heat source and then cooled. The conventional cooling method uses the temperature difference for heat transfer from the heat source to the refrigerant such as water or air, and it cools by natural convection or forced convection. However boiling cooling can utilize latent heat of evaporation (heat of vaporization) when vaporizing; therefore, it is said to have cooling capacity several times that of the conventional method.

This is a lotus root-like porous metal in which many elongated pores are arranged in the same direction. It has cooling characteristics owing to a refrigerant flowing through the pores. When a molten metal containing hydrogen is solidified, pores are formed by hydrogen that cannot completely be dissolved in the molten metal. Utilizing this phenomenon, lotus metals can be produced at a low cost.

When the heat load increases in boiling immersion cooling, the nucleate boiling with a good heat transfer efficiency cannot be maintained at certain point, and suddenly transitions to film boiling where the heating surface is covered with a vapor film. The heat flux (heat flow per unit area, unit [W/cm2]) at the transition point is called the critical heat flux.

*A-STEP is a technology transfer support program whose aim is to put the research results by public research institutes into practical applications as important technology in the national economy, and thus to give some of their profit back to society.

Contributing to solve the heat concentration problem in power semiconductors 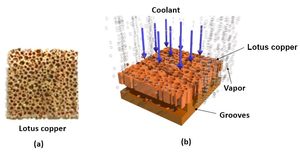 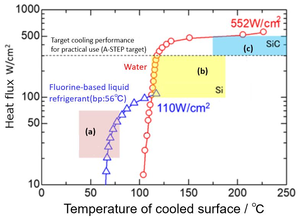 Relationship between cooling performance and temperature of cooled surface