A group of Kobe University researchers have revealed that adding Vitamin B2 to cells that have been exposed to aging stress increases the mitochondria’s ability to produce energy and prevents cell aging. The research group included Professor KAMADA Shinji and Research Associate NAGANO Taiki of the Biosignal Research Center.

These research results were published in ‘Molecular Biology of the Cell’ on November 1, 2021. This international academic journal is published by the American Society for Cell Biology, of which over 7,500 molecular biology researchers worldwide are members.

Japan is a super-aged society and as a result, research into aging is becoming increasingly important to resolve the accompanying medical and welfare issues, and to help people live healthily for longer. The process by which the body ages is not completely understood, however the aging of the cells that make up the body has been revealed to be one factor. As the cell division cycle continuously repeats, the telomere regions at the end of each chromosome get shorter, eventually resulting in cellular senescence, which is when the cell loses the ability to divide. Later research revealed that the reduction of telomere regions is not the only factor involved, and that various types of stress (such as DNA damage and reactive oxygen outbreaks) can also trigger cell senescence. It is thought that the aged cells resulting from this stress exposure accumulate inside the body as it grows older.

Over a decade of research into aging has revealed that senescent cells have the harmful ability to cause functional decline in every organ in the body. Furthermore, it has been discovered that it is possible to prevent or ameliorate age-related disorders that occur more frequently as people get older, such as cancer, cardiovascular disease, Alzheimer’s and diabetes, by preventing the accumulation of senescent cells.  There is intense competition worldwide to develop medicines that will extend people’s healthy lifespan by preventing this accumulation, however such a drug has yet to be made available due to various issues such as side effects.

Vitamins, on the other hand, are essential micronutrients that are required to keep the human body functioning normally. As the human body cannot synthesize vitamins they must be absorbed from food and drink. Vitamin B2 (also known as riboflavin) is prevalent in foods such as meat, eggs and dairy products and is an important vitamin for energy generation and metabolism. Deficiency causes symptoms such as swelling in the mouth and anemia. On the other hand, there are no negative effect associated with overconsumption of vitamin B2 as it is soon excreted by the body. Even though vitamin B2 is an essential nutrient for maintaining health, no research has been carried out into its relationship with aging. This research team commenced research into the effects of vitamin B2 on aging in the hope that if an everyday vitamin could suppress cell senescence, this would contribute towards making low-cost and safe anti-aging drugs available.

The research team discovered a phenomenon whereby resistance to cellular senescence occurred as a result of increasing the amount of SLC52A1 produced. SLC52A1 is the protein responsible for transporting vitamin B2 into cells (vitamin B2 transporter (*1)). When SLC52A1 production was increased, cellular senescence did not occur immediately even under stress conditions (where human cells were treated with a drug to injure the DNA and induce aging). Following on from this, the researchers conducted an experiment where they exposed the cells to stress and then increased the amount of vitamin B2 in the culture solution. They found that resistance to senescence increased in accordance with the amount of vitamin B2 in the solution. Inside the cell, vitamin B2 is converted into a substance called Flavin Adenine Dinucleotide (FAD), a coenzyme (*2) that promotes the chemical reactions necessary for biological activities such as energy production. In fact, the amount of FAD in cells exposed to stress increased, which resulted in the vitamin B2 that had been transported into the cells to be converted into FAD, thus suppressing senescence.

Next, the research team focused on the mitochondria to investigate the mechanism behind FAD’s suppression of cellular senescence. It is known that functional decline in mitochondria causes cellular senescence, and that FAD is essential for energy production in mitochondria as it functions as a respiratory chain complex II coenzyme (*4). When the researchers investigated the response of the mitochondria, they were surprised to find that mitochondrial activity temporarily increased in cells subjected to stress, with the subsequent decline in activity resulting in senescence. Furthermore, the researchers were able to maintain the high level of stress-mediated mitochondrial activity by increasing the amount of vitamin B2 in the culture solution, which also allowed a high level of anti-aging to be maintained.

Vitamin B2 is easily absorbed from food and supplements and is quickly expelled from the body if too much is consumed. Therefore, it is hoped that simple and safe treatments for age-related disorders can be developed that utilize the cellular anti-aging property of vitamin B2 that was revealed by this study. Next, the research team will conduct animal experiments to confirm the anti-aging effect of vitamin B2, with the aim of eventually developing medicine.

1. Transporter: Every cell that makes up the human body has a cell membrane; a barrier composed partially of lipids that separates the interior of the cell from the outside. Due to this membrane, substances cannot move freely in and out of the cell; to do this they require transporters, which are proteins that can move substances back and forth through the cell membrane. Each transporter is responsible for conveying a particular type of substance. SLC52A1, the protein used in this study, is in charge of transporting Vitamin B2.

2. Coenzyme: Enzymes are proteins that are responsible for triggering the chemical reactions required for biological activities. However, there are proteins that cannot do this on their own and need to bind with a coenzyme to be able to function as an enzyme. The majority of coenzymes are vitamins, however in the case of vitamin B2 (riboflavin), it is converted into FAD after being absorbed by a cell. FAD serves as the coenzyme in various chemical reactions (in humans there are more than 60 types of protein that require FAD as a coenzyme).

3. Mitochondria: Located inside the cell, the mitochondria is an organelle that functions like a power plant. It produces a substance called ATP, which is a vital source of energy for biological functions. This mitochondrial energy production is vital for maintaining cells’ regular functions and the respiratory chain (electron transport chain) is a pathway that uses oxygen to produce ATP at a highly efficient rate. However, active oxygen is generated if there is an abnormality in the respiratory chain, causing cell senescence. Consequently, much research is being conducted into the relationship between mitochondria and aging.

5. AMPK: AMPK is the abbreviation for AMP-activated protein kinase. This protein functions like a sensor and detects the energy levels inside a cell (ATP levels). AMPK activates target proteins when the energy level in the cell is low. It transmits the information about the low energy status of the cell and sends intracellular signals to increase energy production and halt cell division.

6. p53: p53 is known as the ‘cancer suppressing gene’ because it stops unrestricted repeated cell division, thus preventing a cell from becoming cancerous. It also plays a key role in bringing about senescence, whereby cells lose their ability to divide. When the cell has low energy, p53 is activated by AMPK and stops cell division.

Molecular Biology of the Cell

A newly discovered anti-senescence function of Vitamin B2 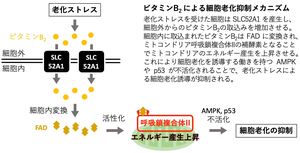