To some, the idea of invisibility leads to mischief, seeing things without being seen. To the pathologist, the idea of invisibility leads to simplicity, seeing the disease in its fullest. In a new study published in Scientific Reports, Japanese researchers report, CUBIC, a technique including a tissue processing that makes human organs transparent, provides better assessment of lesions for pathological diagnosis.

"Traditionally, pathological diagnosis is made by taking 2D sections of a specimen resected from patients. It is effective, but we cannot exclude the possibility that important findings away from the cut surface are overlooked," explains Osaka University Professor Eiichi Morii, who co-corresponding-authored the study.

Contemporary methods are based on staining techniques from the 19th Century. Patient specimens are cut into thin sections that are stained and analyzed individually under a microscope. However, this method has limitations in its relatively narrow range of observation area and in its two-dimensionality. CUBIC (Clear, Unobstructed Brain/Body Imaging Cocktails and Computational Analysis) was first reported by RIKEN Group Director Hiroki R. Ueda, who is the corresponding author of this study, and his colleagues three years ago. CUBIC has been used to observe whole organs mainly from experimental animals. In the new study, Ueda and his colleagues demonstrated that CUBIC can be used to observe organs from humans and that it surpasses current methods for pathological diagnosis/study.

The study shows CUBIC applicability to the 3D imaging of patient lung and lymph node tissues, clearly delineating normal and abnormal regions (Figure 1, Figure 2). After routine observation, many patient samples are stored at hospitals as paraffin-embedded tissue blocks. Additionally, the study shows that the combination of appropriate deparaffinization and CUBIC enabled 3D imaging of these older specimens.

"These results mean that we can use not only newly fixed samples but also paraffin-embedded tissues stored in the pathological archives of hospitals," said Osaka University Assistant Professor Satoshi Nojima, who first-authored the study.

The scientists also examined the practical diagnostic potential of CUBIC. They showed that CUBIC was much more capable of detecting metastatic carcinomas in lymph node specimens compared to standard pathology techniques (Figure 3).

"This is outstanding result to demonstrate the usefulness of CUBIC on practical clinical examination," Nojima said.

These findings show the potential of CUBIC for retrospective and prospective clinicopathological diagnosis.

"Our wish is to improve CUBIC so that it leads to the establishment of a novel field of medical science based on 3D histopathology." Ueda said. 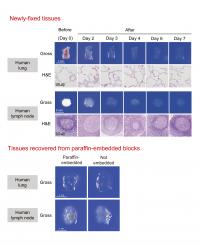 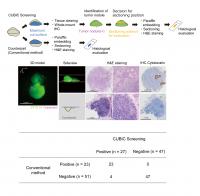