Sepsis - the body's extreme and organ-damaging response to severe infections - is a major contributor to death in patients battling infectious disease. By studying sepsis patients in intensive care, scientists have created a new antibody treatment that improved survival by combatting sepsis when tested in a mouse model. The new approach "has marked translational potential and overcomes a limitation in many murine sepsis studies," say Cameron Paterson and colleagues in a related Focus. Sepsis poses a massive medical and economic burden; it results in at least $62 billion in costs in the U.S. every year and is estimated to cause 20% of all deaths worldwide. Advances in treatments for sepsis have remained elusive, and most clinical trials of new therapies have failed to show a durable survival benefit. While studying a small group of septic patients, Weiqiang Chen and colleagues discovered that the patients showed much lower levels of a protein called tetranectin in their blood compared with healthy controls. The authors saw that knocking out tetranectin in mice exacerbated severe inflammation, lung damage and other features of lethal sepsis, but supplementing the mice with tetranectin reduced organ damage and extended survival. Through screening experiments, the research team designed an antibody that reacts with a peptide in tetranectin named P5 and blocks the protein's degradation. The antibody boosted survival in a mouse model of sepsis, even if treatment was started a full 24 hours after sepsis appeared. Although more work is needed, the authors speculate that their therapy might find use with severe bacterial infections, and may even help some COVID-19 patients - especially those suffering from secondary bacterial infections that can cause life-threatening sepsis. 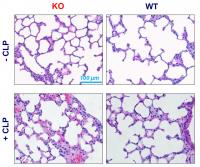