Researchers are using computer models to simulate COVID-19 infections on a cellular level which allows for virtual trials of drugs and vaccines, opening the possibility of pre-assessment for drug and vaccine efficacy against the virus.

Firefighters at the centre of the battle against the massive Fort McMurray, Alberta wildfire in 2016 have persistent lung damage, according to new findings published by a University of Alberta occupational health research team. The firefighters had more than double the risk of developing asthma compared with the general population. They also exhibited a number of changes in lung function tests supportive of an effect on the lungs, including greater lung hyperreactivity and increased thickening of the bronchial wall.

Why do alterations of certain genes cause cancer only in specific organs of the human body? Scientists at the German Cancer Consortium (DKTK), the Technical University of Munich (TUM), and the University Medical Center Göttingen have now demonstrated that cells originating from different organs are differentially susceptible to activating mutations in cancer drivers.

The case of a patient who experienced two facial palsies - one after the first and another after the second dose of the Pfizer-BioNTech COVID-19 vaccine - strongly suggests that Bell's palsy (facial nerve palsy of unknown cause) is linked to the Pfizer-BioNTech vaccine, doctors write in the journal BMJ Case Reports. 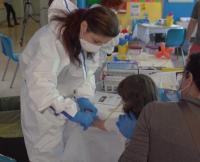 As a form of cancer therapy, histotripsy uses ultrasound imaging to monitor treatments in real-time, making it noninvasive with minimal side effects. Thus far, histotripsy has shown promising results in clinical studies for liver cancer.